Sendero at IMC12 in Hong Kong

The 12th annual International Mobility Conference was held in Hong Kong. Gil Lutz attended, gave a presentation on Sendero GPS and shared his experience with us. Hong Kong mall city Christmas display is a large lighted display in the 12 story city mall. We were getting a kick out of the people taking pictures in front of the display so this is a picture of Gil in front of the photo activity. 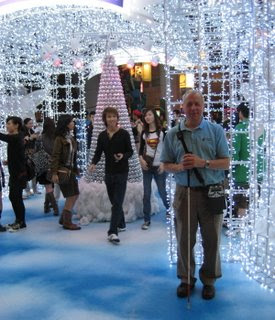 Hong Kong public park. As we explored we’d come upon these fabulous public parks. There was a big variety in their sizes and themes. In several there were tables where there were men playing board games with a lot of intensity and interaction. 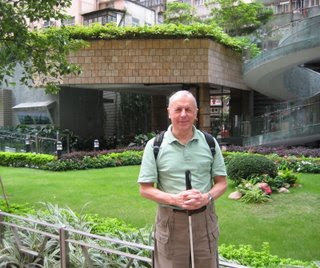 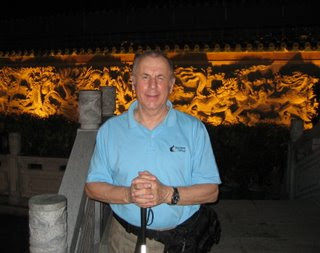 As part of the IMC12 conference we were treated to a night cruise of the Hong Kong harbor. The whole conference was bussed to the harbor where we boarded a very fancy ferry that had an upper floor that was set up with a beautiful buffet. There was live entertainment by a group that went non stop from 7 until 10. 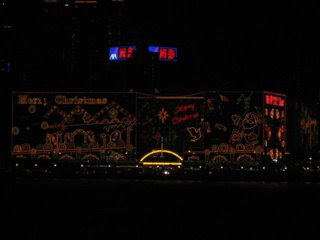 At 8 o'clock we all went up to the upper deck to watch the nightly laser show over Hong Kong. There were lots of large buildings with animated light displays. Most were showing Christmas themes that we thought were very interesting because of the religions practiced here in China. There was a dance floor on the deck where the live entertainment was and it was filled with dancers, Men and women, women and women and men and men. It was a noisy, lively evening. 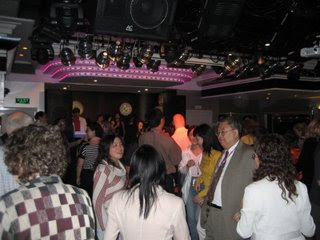 When we were on the bus heading for the harbor I was able to get good satellite reception. I created a POI for the ferry dock and tracked our progress as we orbited the harbor. Lots of interest by the people at our table. They repeatedly asked "where are we now". Had a good time demoing as we toured. 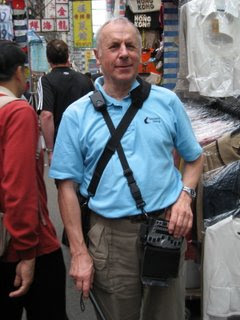 We went out "on the town" last evening. There's a street near the hotel called Nathan St. It's lined with shops that open late in the afternoon and closes at midnight. These street markets were mostly open air and you could buy anything, literally. We really enjoyed bargaining in the markets where the starting asking price really meant nothing. When you ask the price they quote you a price then you start to haggle. Michelle is a champ haggler. We had a ball. We probably walked 10 miles. Everyone spoke a little English but most haggling was done with a calculator. They would enter the price they wanted then Michelle would shake her head no and give them a low figure. At least half of the price they had asked. then the fun began. If she thought their final offer was too high we'd walk away and they would follow to continue as we walked away. We had a ball. 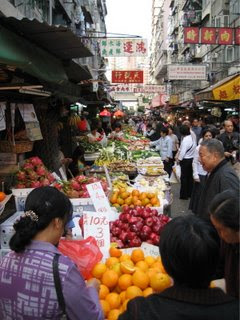 It was also jammed with people. The sidewalks are about three people wide so it was like walking in a parade.

There is shop after shop of almost anything you can imagine. Very interesting. Especially the dried herb, sea creature and some other indistinguishable items. We walked the whole length of the street then back on the other side. If you think NYC is crowded it's a desert compared to Hong Kong. 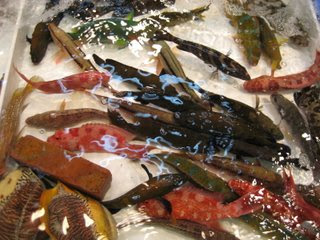 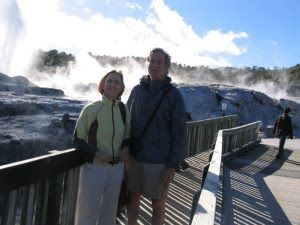 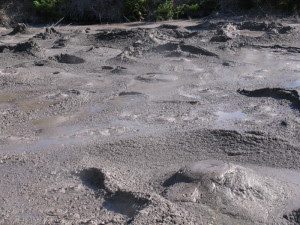 Just Zorbing at the Agridome in Rotorua 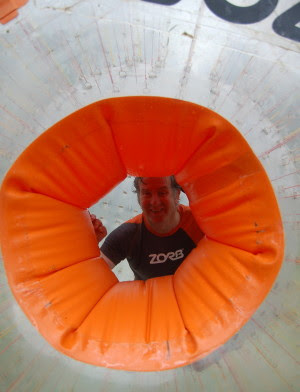 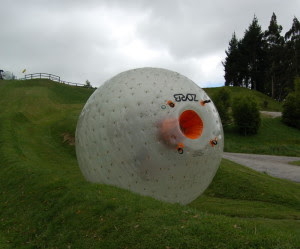 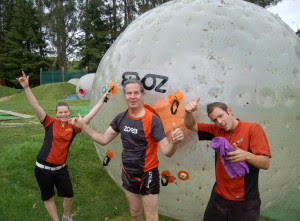 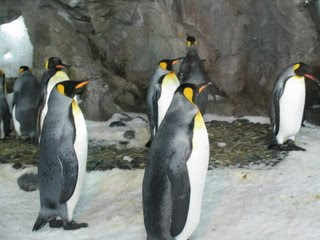 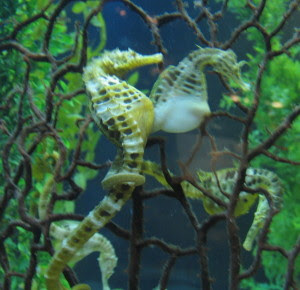 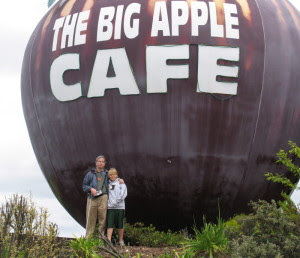 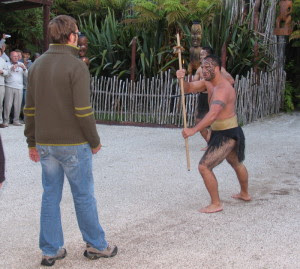 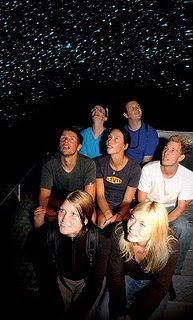 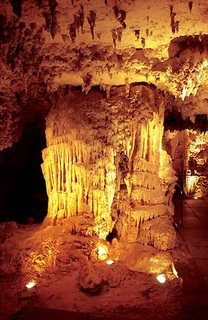 Mike and family visited the Waitomo Glowworm caves, but were not allowed to take photos, so these are off the Waitomo information website. 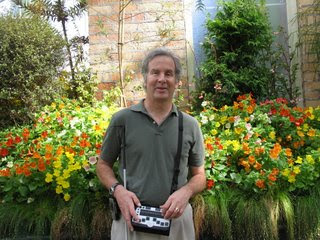 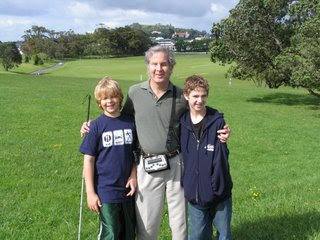 When you only have 4 full days in a country and an entire day flying, one has to hit the ground running. That is just what Carson, Jennifer, Wyndham and I did in New Zealand. After landing at 4:30 am on Sunday, we made our way to the Hyatt hotel in down town Auckland, got cleaned up and headed outside to explore. Fortunately, the rain stopped and the sun was out by 8 in the morning. It is supposed to be spring here.

Ordering breakfast in another English speaking country is amusing as one sorts out what words mean. A short black could be a rugby player or an espresso coffee. Other items may have the same name but different flavor or texture. Biscuits and gravy would be cookies and gravy in New Zealand.

I had the Domain as a point of interest from my September visit so we set that location and wound our way through the Auckland streets. I didn’t have New Zealand street maps, only my user points. It was about 2 kilometers.
The museum wasn’t open until 10 AM so we wandered through the Domain grounds and stumbled upon the incredible botanical gardens. I loved the section with bright flowers. The boys liked the 4 foot lily pad with spikes.

In the museum, my favorite was the 100 foot Maori canoe. The boys liked the volcano simulator. We spent a couple hours perusing 3 floors.

We took a different route back to the hotel, once again using the “getting warmer” method to find our way with the Hyatt set as our destination. There was so much green space. We found lunch on our way.

It was more of a challenge to find the city bus to visit our friend Roxanne and family that evening. Thank goodness the 767 bus at the Britomart is marked for future reference. We had a great visit and had fun seeing our boys connect for the first time.

On Monday, I flew to Christchurch on the South island while my family went to the aquarium and explored Auckland.

On Tuesday, we all took a tour to Rotorua. The commentary on the bus was fantastic especially from Barny who was Maori and quite animated.

We visited the Waitomo Glow Worm caves. It was incredible to see the entire roof of a cathedral cavern covered with glowing lights, like solid stars in the sky.

The evening was spent feasting in a traditional Maori village with dancing, music and an education about the Maori ways. The area is surrounded by geysers and small gurgling spurts of steam. I enjoyed feeling the carvings from the master carvers.

We got our thrills experiencing the zorb, an eight foot beach ball, which you climb inside with a foot of water and roll down a hill.

We stayed in three hotels. The Hyatt is as you would expect, up-scale and the King Residence suite was perfect for a family. Unlimited data on the high-speed Internet is not normal in New Zealand.

The Sudima in Rotorua is too much money for to little value.

The Heritage in Auckland had a huge room and good location but a limit on Internet data.

We recommend the Great Sites Tour Company. It might be cheaper to plan one’s own sites and just use them for transportation