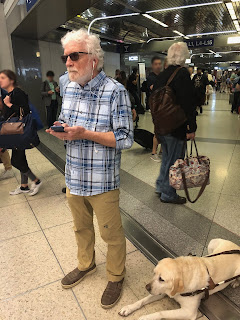 We visited O’Hare Airport Terminal 3 (Concourse K) to determine how effectively Loud Steps was operating. We met an O’Hare official at Security Gate 6 between Terminals 2 and 3 and proceeded to Concourses K. I was introduced to the functions of the test application and we used it to locate several destinations.  The four test routes were greater than 800 feet and the app demonstrated near perfect performance.

We tested the application’s ability to guide users from one concourse to another through the relatively crowded central common area shared by several concourses. In two such tests, I was able to navigate from Concourse K to Concourse L and back again. Further tests will be required to determine application accuracy for this task. 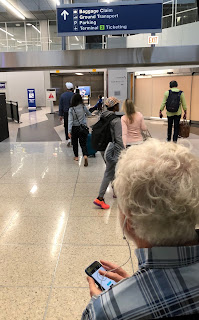 We found that navigating within a concourse is relatively simple for individuals with visual impairments, given that concourse design and structure is similar and predictable across airports. For example, most concourses have a relatively easily followed central walkway containing sequentially numbered departure gates along both sides that are intermingled with store fronts and waiting areas. In addition, concourses generally contain many fellow travelers from whom supplemental wayfinding information can be readily solicited.

We did run into interference in the L Concourse apparently caused by the proximity of the air control cables to the iPhone.  We will be investigating this issue further.