There is a very unique rustic inn, West Point Inn, only a few miles from the heart of San Francisco and yet you will feel miles away from civilization.

You will readily find it in the Seeing Eye GPS user POIs as well as on our other product databases, especially if you have downloaded the USA User points of interest. I was there some 7 years ago and recorded a few points at the inn. Others have added points on the trails and key points in that Mount Tam region. 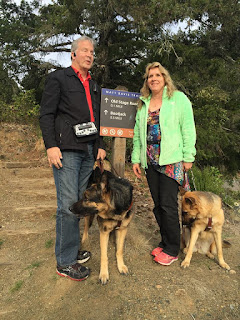 To get to this historic inn, over 100 years old, you drive to the Pan Toll Ranger station above Mill Valley and walk 2 miles. It is not a particularly hard hike but there are some trails and fire roads that intersect the Stagecoach and old Railroad grade roads that lead to the inn.

The challenge for my wife Gena, also blind, and me, was to find our way on our own. I had the ranger station marked on my BrailleNote and the inn but not the route between. Our driver dropped us off, helped us find the right path and off we went with our two Seeing Eye dogs, Tank and Yulie. I hadn’t recorded a manual route last time I visited so we were mostly relying on the getting warmer method to our destination. The two roads did seem to be in the map database but I wasn’t sure how much to trust them since they are off the paved road grid.

There were several bikers flying down the mountain but nobody heading our direction. It was intimidating to hear them coming around a corner and then go flying by. I suppose we could have hollered to get someone to stop if we really got lost. On the other hand, if we weren’t on the main trail, there probably wouldn’t have been bikers riding by.

It was an amazingly beautiful late afternoon, out in the woods with nice smells, the sounds of birds and no traffic sounds. The temperature was in the low 70s. Impressive for November.

I have to admit I was apprehensive about finding our way. This tension was part of what made the short two mile hike feel more significant. Certainly the innkeeper who we called ahead of time was concerned and asked us to check with the ranger so they would know we were on the hill. Pleasantly, they did not try to talk us out of going on our own. One person did mention that two people died on the mountain this year, a not-so-subtle reminder not to be stupid.

The road did switch back and forth so I wondered a few times as our destination direction and distance moved around a bit. We came to a dead end at a few small buildings but nobody was around. We back-tracked and found a fork in the road we had missed. Tank is pretty good about finding the path of least resistance but this was a Y in the road where either leg was equal. We checked cell coverage every so often and we could occasionally get 1 out of 5 bars. I also had a two-way radio, which had the ability to go on emergency channels more because I like radios than because I thought we would need it.

We weren’t tracking the time but somewhere after an hour, we came upon the West Point Inn at 1,800 feet above sea level and exactly where my BrailleNote said it would be. The innkeeper David was quite happy to see us and proceeded to give us a tour including lots about the history of the inn. The founder was a survivor from the Titanic. He started it as an inn. It became an officer’s club in the 40s and then was saved by a local community group as an inn with a lodge of 7 rooms and 5 small cabins. We had the so-called honeymoon cabin. None have electricity. There is a gas stove and lamps in the lodge along with the lone shower. 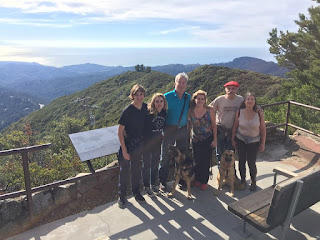 It was really fun mingling with other guests as well as having our private time. We even met someone we knew through friends. I surprised Gena by having her daughter and boyfriend show up along with his parents. We all hung out and did more hiking the next morning. We came across this wonderful topical bronze model of the area at the East Peak visitor’s center complete with Braille labels. It was about 4 miles from there back down to the ranger station and our awaiting vehicle home. 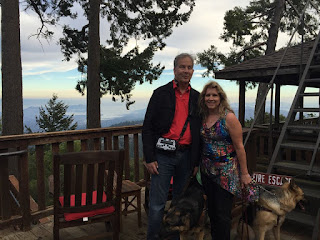 I now have manual routes/replay files for these hikes along with detailed points of interest like a gate across the road, a water tank and a bathroom. I highly recommend a visit to the inn. It is only $50 per night per person. You can book 3 months in advance and popular days book right away. I’d love to book it for a whole group of blind folks like we used to do with the WayFun trips Sendero organized from 2003-2009. The child-like feeling of accomplishment in navigating to this special place using the accessible GPS and mobility techniques is huge. I know many of you on this list have had similar revelations using your technology. As we say, “it is better to travel hopefully than to arrive.”