I hope everyone has a fabulous New Years. Thank you for all your contributions to this list in 2014.

We are on a Disney cruise out of Port Canaveral Florida to the Bahamas and back. Our celebration will be on the high seas. I will of course be using my BrailleNote GPS along the way. I marked some points when we did this two years ago which will augment the nav aids. It is always interesting to know speed and direction of travel and distance from the nearest town. They have a pretty good app this time for onboard communication and information. It is 80% accessible. I will be interested to see what points come up on the Seeing Eye GPS app out to sea. Others might have marked points in Foursquare.
Mike's updated Disney Dream Orientation Notes

I noticed in route to the port, user points created by Michael Beukenkamp, one of our active users some years ago. It is always fun to see those user footprints as our friend Peggy from Oregon calls them.

I have updated a lot of user points from the bonus category with the proper category. Feel free to do that if you run across some and always remember to create and share your user points.

If you haven’t tried the Seeing Eye GPS app yet, remember that the one-month subscription is only $9.99.

We look forward to bringing this app to you in Australia, New Zealand, France, Israel and other countries in 2015.

Mike and the Sendero Team

A Nod to the Reticent Blind Traveler 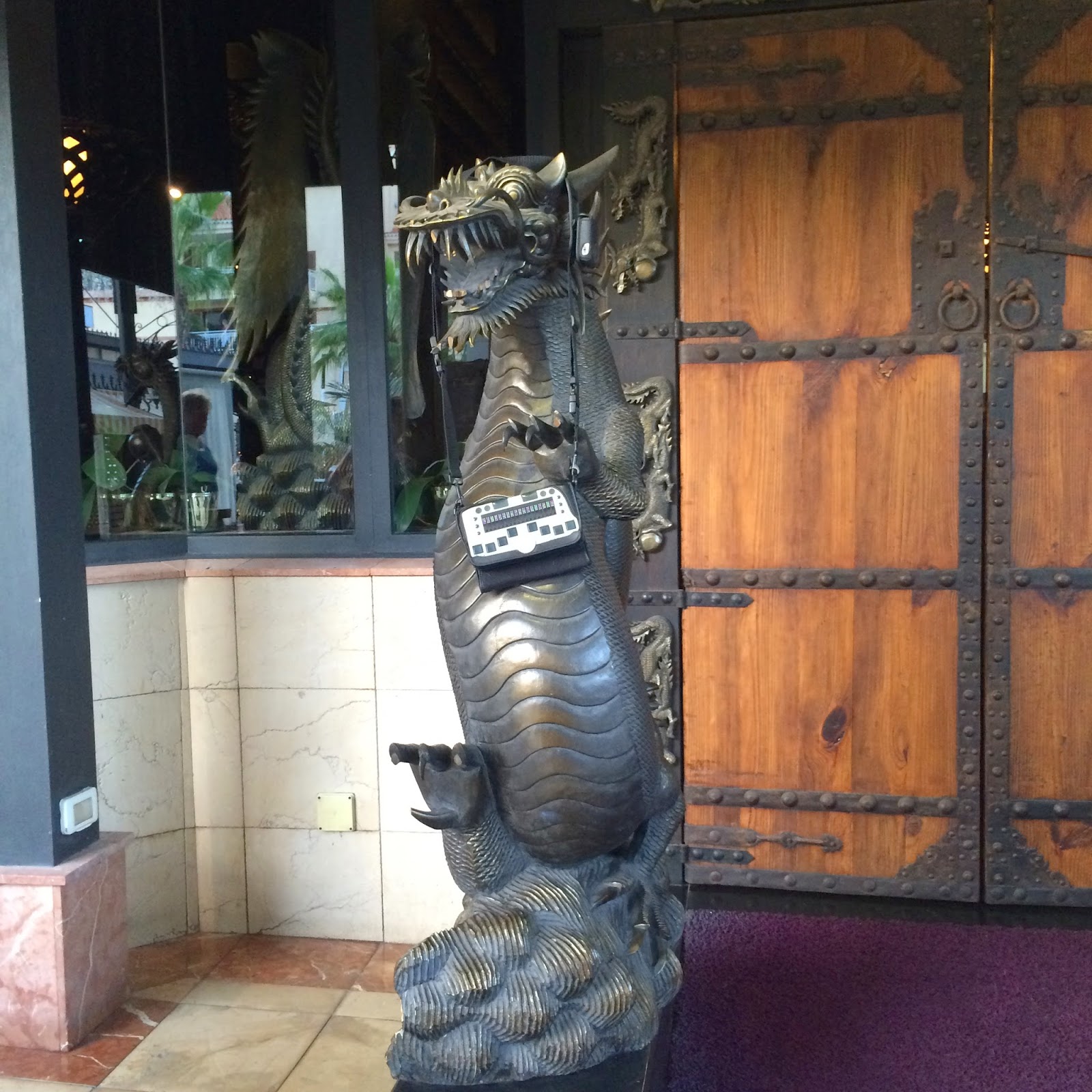 As one who is perceived to be a “super” blind traveler, I think it is only honest to tell the not-so-glamorous side of the story. After two back-to-back long trips I was thinking about the details involved in taking a trip, just how complicated the whole process is from booking transportation and hotels through arriving back home days later. Since I travel over 100,000 miles a year just on United Airlines, I tend to think of trips in terms of a conference, city or country but not the copious details that make up the trip. It is very rewarding to travel the world as a blind person but I would be kidding myself and you if I didn’t admit that it is a mixture of complexity, frustration and a splash of amusement.


Picture this last trip to Germany and Spain for example while navigating without the ability to read signs or to see landmarks. I did have my cane, lots of experience and my accessible GPS tools. I took a taxi from home on Monday morning to the Davis, California Amtrak station, took Amtrak to Richmond, switched to BART, got off BART at the San Francisco airport, located and took the air-train to the correct terminal, located and went through security, waited in the United Red Carpet Club for an hour, found my way to gate 100, flew to Frankfurt Germany, 10.5 hours flying time, cleared customs in Frankfurt, walked through the Frankfurt airport to the train station, located the correct platform for the train to Stuttgart, traveled a couple hours and was met by a guide to help me transition in 9 minutes to a connecting train, monitored my GPS on the ride to Horb where I was met by my host and finally ended up at their house on Tuesday some 18 hours in route.


Other than the one guide in Stuttgart, I made all these transitions on my own with the help of the occasional passer-by. Truth be told, I counted 9 people that I asked directions of just finding my way from the airport gate to the Frankfurt train station.

After one night in Horb, I rewound the train trip to Frankfurt, again with the assistance of a guide for the connecting trains. I then took an Uber from the train station in Frankfurt to my hotel.

I used my computer with Sendero Maps, my BrailleNote GPS and my iPhone GPS to find a restaurant for dinner and then to navigate to it and back.

I took an Uber the next day to the Frankfurt Airport. I found my way to security and my gate without assistance but not without a hassle. One thing about airports in Europe, particularly Frankfurt, they are big on official guides for the blind. You are supposed to tell the airline 48 hours ahead of time that you need assistance and if you get to the ticket counter and have not done this, they admonish you. They then want you to wait in a roped-off holding area for a guide to take you to the gate. They will hang on to your passport if you don’t insist otherwise. The agent got very upset when I declined their guide and headed for security and the gate on my own. The tricky part is getting directions because of the language barrier. There is no telling when wanting to ask for directions what language the person might speak. It takes a lot of trial and error to get useful directions from the general public.

When I get to security, the officers there are flummoxed that I don’t have a guide. They want to call for somebody. I just keep moving politely refusing a special guide.

It is not that I just want to do it myself, I have learned the hard way that one can sit in the holding area by the front ticket counter until the very last minute, which makes me very nervous. I know of people who have missed flights because of a mix up when a guide doesn’t show up. I’d rather wait in the lounge or in a coffee shop and getting lost a few times is better than anxiously waiting.
I actually waited until the prescribed meeting time at the Lufthansa lounge for the guide. When they didn’t show up, I set out for the gate on my own. For the flight to Madrid,

we took a bus from the gate 1.5 miles to the aircraft. The guide caught up with me just as I was boarding the plane where I was handed off to the flight attendants. 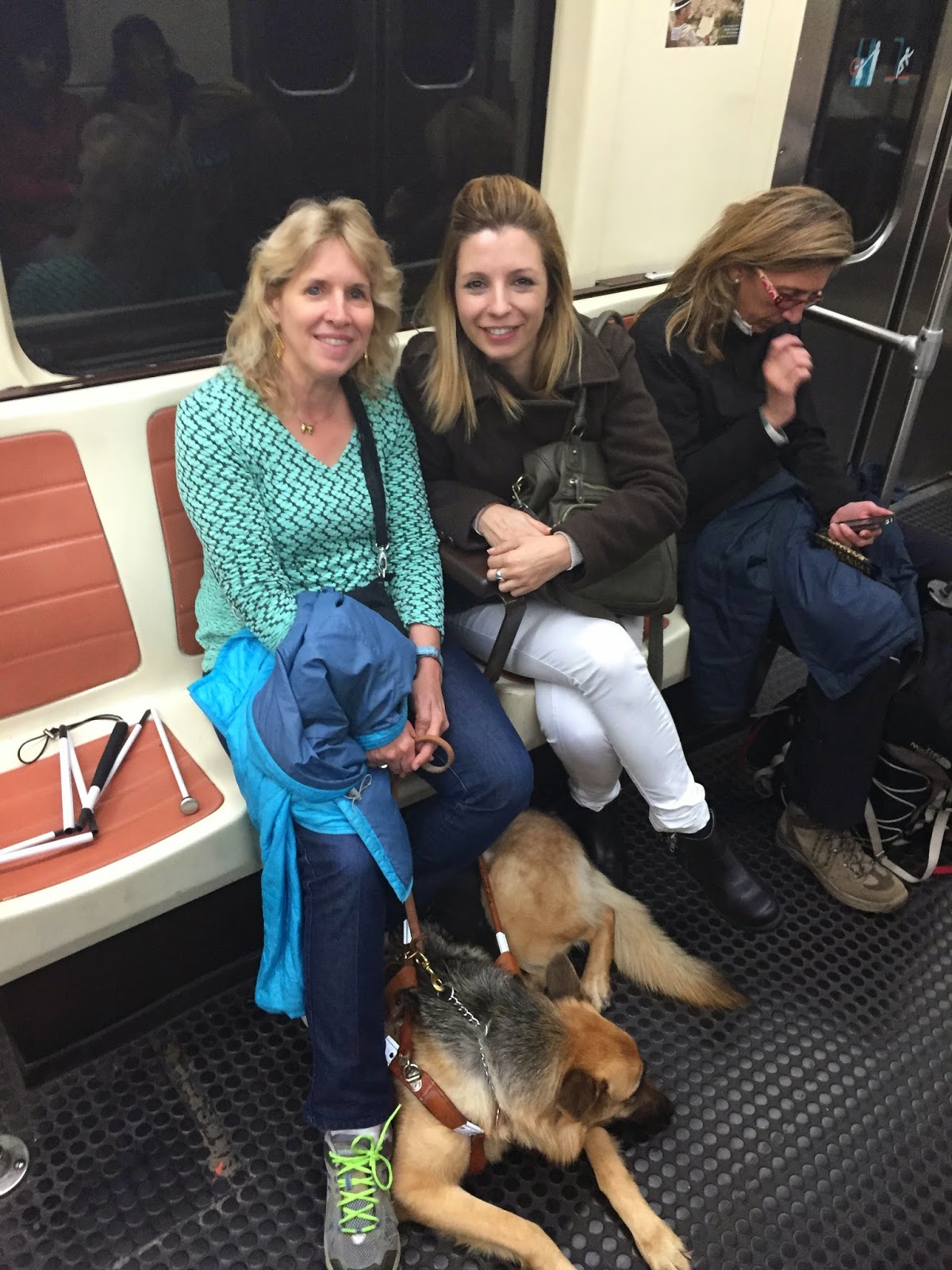 After a 2.5 hour flight, I was met in Madrid by a guide who took me in a van from the aircraft stairs to an exit, completely bypassing customs. He helped me find a taxi that took a credit card. So far, I had managed without getting any cash Euros. I doubted there would be an accessible ATM.


Once in the taxi, I tried the Seeing Eye GPS
for the first time in Spain and was even brave enough to switch my phone to Spanish to see how the translation worked. Good thing I had it as there were two of the same hotels and the driver was confused about which one to take me to even though I handed him a written address.


Travel in Madrid over the next two days was fairly uneventful. Most of my time was spent at the conference, walking distance from my hotel. I took one taxi and Uber twice. My wife, Gena, joined me in Madrid and we took the subway into mid-town with the assistance of a sighted person we met at the  TifloInnova conference, the lovely Alejandra.


The next to and fro was flying to the Canary Islands from Madrid and back. We now had Gena’s Seeing Eye dog. I was pleasantly surprised that we had no problem with Uber, taxis or on the flights with the dog. I had left my dog home for a couple of reasons. 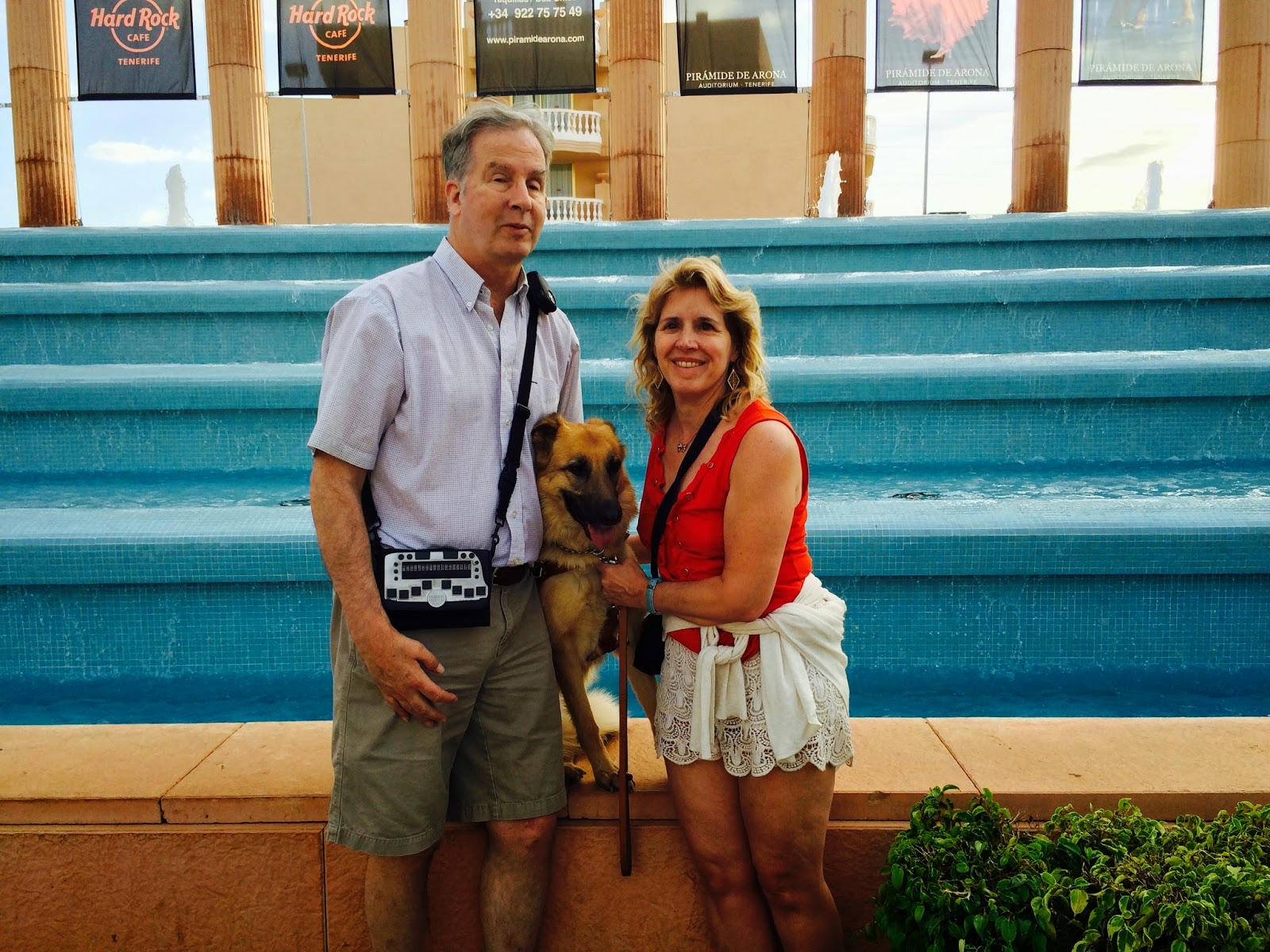 Although I can get along in Spanish, all the navigation details, are much harder when not in one’s native language like what is the name of this business, what is on the menu and where is my bus stop? Dealing with our resort and getting around Tenerife was a lot of work to put it mildly.


The return trip home was much like the trip over, fly back to Madrid and then a shuttle to a nearby airport hotel for a short night. The next morning, a shuttle back to the Madrid airport, get our boarding passes at the ticket counter, almost a problem with Yulie, make our way to the gate, fly to Frankfurt, change to the United flight to San Francisco. My assistant Kayla met us in San Francisco and drove us the 1.5 hours back to Davis. Gena’s dog Yulie survived 18 hours in transit without any issues. I don’t know whether she or I were more relieved to end the travel. I can’t help but ask myself, “Self”, was it all worth it? Signing off so I can book my next trip. Ug!