High in the Sky


I am pleased that United finally has Wi-Fi on some flights. It has worked pretty well flying from San Francisco to Frankfurt Germany. I am writing from 37,000 feet a couple hours from Frankfurt. I am using my laptop with Sendero Maps to figure out where to go once I land. I have a couple train connections. I have also switch on the GPS receiver to see our details while flying.

The nearest User point is 25 miles away. It is called Pointbled at the Royal College for the Blind. It was created by J Ram. The next closest is Cardiff Whales.
Heading East at 577 MPH.

Uber-ing our way through NYC with help from accessible GPS


Gena and I had a work/play trip to New York City. Every trip involves a lot of transportation logistics particularly when we had separate meetings and then events every night. We were staying down town and had most of our events mid-town. Thank goodness for Uber. We took it 4 times. Three of the guys were afraid of our two guide dogs but very professional about taking us. One guy refused at first but with much persuasion, he took us. Unlike San Francisco where every cab driver says they are allergic to dogs, these guys seemed to have a genuine fear of dogs. We were very grateful for the convenience that Uber afforded us.

As usual, I was running both my BrailleNote GPS and the Seeing Eye GPS while in the Ubers and also on foot. I remember the days when GPS didn't work very well among the tall Manhattan buildings. The accuracy can bounce around but it's not as bad as it used to be.

I really used Sendero Maps a lot to figure out the proximity of our hotel, meetings and restaurants. We had four nights to figure out restaurants for and there were endless choices in New York. I, of course, got recommendations.
All the restaurants were quite good. The one with the most character is called Barbetta on 46th Street, just a block away from the Lunt-Fontaine theater where we saw the Motown musical. It has been run by the same family since its inception in 1908. It seemed odd at first with no background music but once the place filled up, it had a pleasant lively atmosphere. The waiters were really fun. We were joined by 4 local friends. The food was great too. This is definitely a user POI to be remembered.

I sometimes get bored in movies or plays but Motown gave me no opportunity to take a nap. It was fast moving, colorful and of course with wonderful music.

In the second half, the Diana Ross character asked for volunteers to join her on stage to sing the "Reach Out and Touch" song. Gena raised her hand and was chosen.
She and Yulie stepped up on the stage and sang along with Diana. They stuck the mic right in front of her mouth, Gena's voice booming through the theater. She knew all the words.

After the play, Gena talked our way back stage to meet some of the actors including Merva who played Stevie Wonder's mother and Gladice Night. She also used to sing in real life with Stevie as one of his back-up singers. We met young Nathan who played Michael Jackson. We had a chance to talk with the Diana Ross actress, Krystal Joy Brown, and took photos with her. 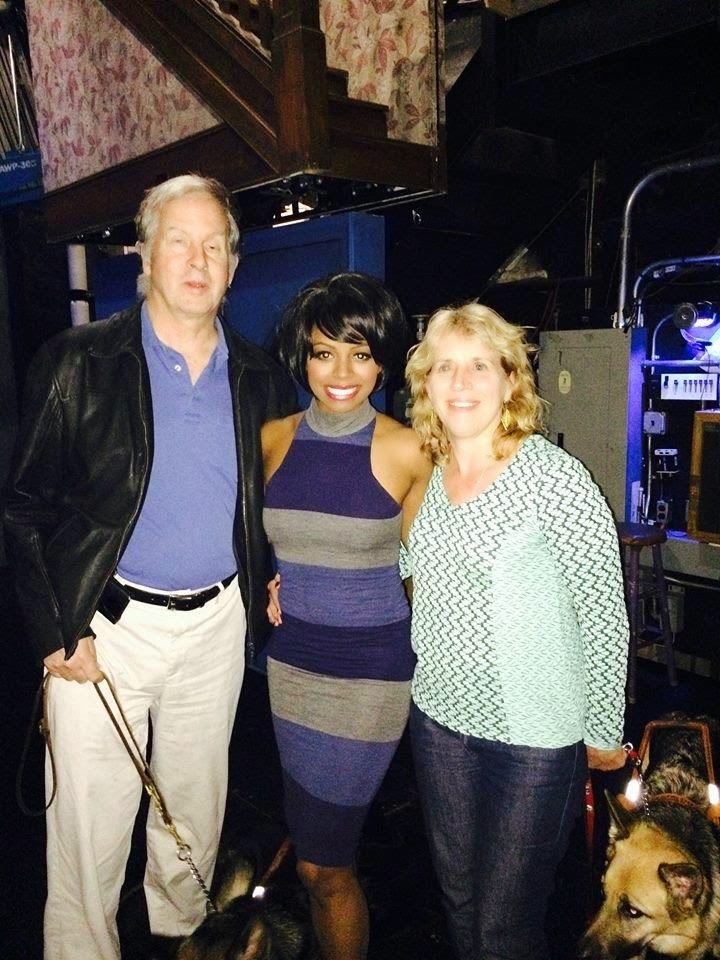 We capped off the evening with a drink back out the Italian restaurant. When I spoke to a couple of the bus boys in Spanish, they promptly sat down at our table and chatted with us for quite a while, quite enamored with our dogs.

The Uber ride home was almost a disaster when the driver refused to let us in his car with two dogs. I employed my best diplomacy and we eventually climbed aboard for the ride back down town to the Conrad  Hotel.

Oh, did I mention that the room in that hotel had completely flat switch panels for all lights and other functions in the room? Upon discovering this when we checked in, the bellman was mortified by our predicament. We went out to dinner that first night and when we returned, he had put raised bumps on all the key functions. This entailed finding a local Rite Aid and cutting up some materials meant for a children's craft kit in order to make the buttons somewhat accessible. We gave him a very big tip and the management a very hard time. They were all appropriately embarrassed by the problem. We had to educate them about the difference between an accessible room for a person in a chair and a blind or visually impaired person. I'll write more about this in another blog.

I have  saved the best for last. It so happened that Stevie Wonder was beginning his Songs In TheKey of Life tour at Madison Square Garden on my birthday. After waiting at length at the back-stage door, we found our way into the sold-out concert for a real treat. I never get tired of Stevie's music and his impassioned pleas for peace and love. The audience was very enthusiastic.

Afterwards, we had the pleasure of mingling back-stage with band members and eventually with Stevie. After all the meet-and-greet sessions were over, I sat in his dressing room with a few family members and friends. When they broke into Stevie's iconic happy birthday day song, I couldn't believe it.
What a very special birthday treat even though my official birthday had ended at midnight 2 hours before.

Even at the early AM hour, I had no problem scoring an Uber ride home.
Pretty amazing 4 days in New York not to mention the business component of our trip.