For Thanksgiving 2012, Gena and I were away from all family, spending it in Thailand and in Japan. This Thanksgiving was quite different, spent at the South Seas Plantation on Captiva Island Florida with our combined 4 kids.

On the Sunday before Thanksgiving, we had a major family feast at our house in Davis with 24 family members in attendance plus 80 other people Gena invited unbeknownst to me, which I will mention in a minute.

The day was pretty spectacular with an over-the-top meal catered by Chef Jeff plus wonderful dishes brought by the family.

Around 4 PM, between dinner and dessert, Gena asked me to step out front for a minute. She began saying things I didn't quite follow to two people on our front walk, "Go ahead" she said. A woman responded that they couldn't because they were blocking the street. I had no idea what they were talking about until the silence was shattered by the cacophony of an 80-member marching band playing happy birthday. My jaw must have hit the pavement. I alternated between wanting to crawl into a hole and smiling ear to ear. 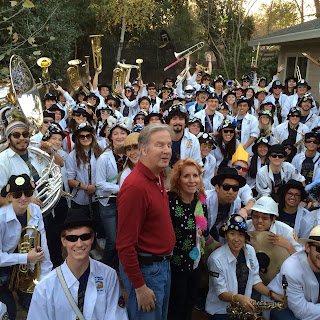 When they finished the birthday song, they marched along the garage into our back yard. We followed and found seats on our brick porch, not quite large enough for 80 very active college musicians from what is called the Cal Aggie Marching Band-uh. When they broke into song again, it was with a Sousaphone and bass drum two feet from my head. I was thinking how well I could hear them at our house when they were in the football stadium 2 miles away. Now I knew why.

After the first song, with goose bumps all over, I tried to tell them the significance (video) of hearing and seeing the band at Picnic Day  as one of the first visual experiences I had after my stem cell transplant and restored vision in March 2000 as related by Robert Kurson in his Bestselling novel about me, Crashing Through. See the text below. Gena had to help me explain as I got all choked up.

Not only did they play well and enthusiastically, they were very active, dancing, gyrating, laying on the ground and circulating, the wind section clockwise and the horn section counter clockwise. Motion and sound, two of my strongest sensory suits. Dressed in white, with flashing horns and big hats, I couldn't have asked for a more thrilling sensory overload. I am forever grateful to Gena for this unique and stunning surprise.  See the Cal Aggie Marching Band Flickr Page photos

From Crashing Through:
"Near the end, the Cal Aggie Marching Band swung into action. As the players passed in front of May and his boys, they stopped marching and held their positions. Some members were just three feet away. May inhaled their bright uniforms and studied their brass instruments, some of which looked bigger than the person who carried it. Someone yelled a command and the band broke into another song, their knees rising and falling, drummers lifting and pounding, trombones herking and jerking, kids whirling, every uniform matching, and May marveled at it all, and when he looked down he could see his children moving too, pointing at things for him to see, telling him what was before them, and May could feel tears running down his face, and it seemed strange to him to be crying in front of the Cal Aggie Marching Band when he hadn't cried the day his bandages came off, and it seemed right to him to be crying because when he looked down again his sons seemed to be looking at him."