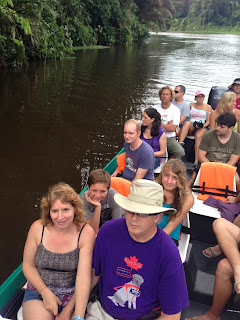 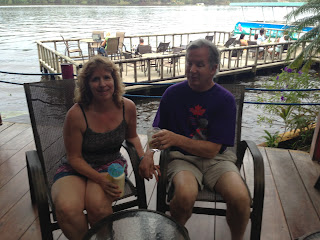 more about use of user points in Costa Rica


I must publicly thank Rich Irwin for the many points he recorded along the rivers and channels to Tortuguero, where we are now staying. From what I can tell, he recorded points in April 2007 and I recorded points in December 2004. With no maps, these points are precious. Our friend once called them GPS foot prints. I like that term.

One of Rich's points was, 7 meter boat with HP engine or something like that. Another was 3 meter crocodile. I wasn't sure what category to update that too.

I did record a replay on my accessible GPS for part of the trip so you can hear these points, our speed up to about 43 KPH and even altitude as we rose from sea level inland. The others in our boat enjoyed hearing my blurts of information as well. I of course recorded many new points and an audio file of the boat ride as well as posting the GPS replay.


Every zip line place is slightly different. As it turns out, I probably could have taken the OnHand. We got lucky and it didn't start raining until the last ride. We went on 21 zip lines. The guides were fantastic, no issues about having two blind people. In fact, I think they had almost as much fun as we did.

The Terraventuras zip lines are now marked and I highly recommend them.
Maybe someone can do replay files. I'd love to know just how fast we got going. We were often as much as 200 feet above the ground and they said we were going up to 40 miles per hour. 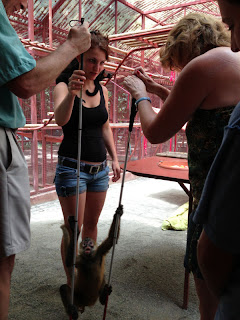 
I will be in Costa Rica next week. It has been fun using Sendero GPS to put myself virtually at points I recorded several years ago in order to remind myself of where certain things are located. I also updated the categories.

This reminds me, Mr. RFI, the Acapulco Mexico points you recorded need their categories updated.

I even have points marked where we saw a sloth and crocodiles. I am reminded of the lodge rooms too because I had them marked at the Pichira Lodge in Tortuguero.

This time, I'll be using the Braille Sense OnHand. I am bringing a good plastic bag to seal it in when we are in the boats. They have been known to flip over. Sure will be nice one day when we have maps for Costa Rica.