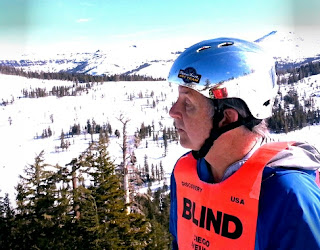 I haven't been skiing for a few years at Kirkwood. The trip is about 2 hours  and more than half is completely out of cell range. I like using the Seeing Eye GPS app on the iPhone at the same time as the Sendero GPS on the PK in order to understand the strengths of both. Of course, the PK version has had over 10 years to mature so it is really the bench mark for accessible GPS.

On Highway 16 and 88 where there was no cell service, the iPhone would track the route as long as we didn't stray from it. I really couldn't choose a new destination, which turned out to be necessary when we got within 10 miles of Kirkwood and the road closed due to a 3 car accident. After putting chains on and driving at 10 miles an hour, we turned around. There were 3 tow trucks within 100 feet of us and two police cars, one was in the ditch.

We had to decide, do we wait to see if the cars clear and the road opens, do we find a hotel or do we go home. This is where the search capabilities of the Sendero GPS and explore mode came in very handy. We had lots of time to talk about the options. It gave us something to do as we  waited for the
police car to be pulled out of the ditch so we could proceed back the way we came. About every 5 miles, there was another car off the road and so we would wait again.

I located a hotel about 30 miles down the road. By the time we reached it,  we decided it wasn't that far to go back to Sacramento so we did end up going home, a six and a half hour trip that should have taken 2 hours. We did try again in the morning and made it to Kirkwood in 3 slow hours but no major issues.

It was both entertaining and useful to have GPS on this trip. Kim from Sendero was driving. She had her hands full dealing with snow and other cars so it really was helpful that I could be the navigator. As much as I am excited about the iPhone version coming out, when it comes to hard core navigating, give me my PK any day. I do like having the best of both worlds, power and convenience.