I was at the Consumer Electronics Show in Las Vegas for six days this year. I had the honor of being an Innovations judge for 90 products so I had fun checking out some of the winners I had voted on. I have put ** in front of the products I will consider purchasing when they come out.

We have posted recorded audio clips, written brief text descriptions and taken images of products, which are posted below in Blog entries from January 6 through 11. You will also here from Bob Sweetman. He and Sue were with us for much of the show. My son Carson took photos along with my guide Carrie.

A couple general themes jumped out at me in 2013. Sure seemed to be more blind folks at the show. I personally met at least 7. Nothing like having a full time sighted guide/reader at no charge.

It was fun to find accessibility in surprising places, like the apps the manufacturers had no idea would work with VoiceOver with their products. That said, I’d have to say that my most exciting accessibility find in January was not at CES, it was at my home with Comcast cable, my Tivo recorder and the companion iPhone app. Accessing TV content and menus has been for years something I have had to depend upon my kids for and they weren’t always thrilled to help me out. Now I feel like a kid in a candy store with 99% accessibility using the iPhone Tivo app. I tried to visit them at CES to see if they know what they have but Tivo didn’t have an exhibit.

Like always, there were scores of companies showing cell phone cases, so many, that I mostly didn’t bother stopping at their booths even though I am in the market for an iPhone 5 case. Some are about functionality but most are about style and design. I did spend time at the Ozaki booth and liked their offerings. There are so many companies having to do with collecting and storing energy. Solarmer Energy was showing a thin flexible solar material. Think of back-packs and other curved surfaces that could benefit from thin flexible solar sheets. Perpetua collects body heat. Think geothermal energy. They had it built into a couple watches, completely powered through the heat contact with your arm. Horizon Fuel Technology has been at CES for several years but they finally have a shipping product. Six inch cylinders about the size of a popsicle hold water. When charged in the fuel generator, they can be plugged into a USB pack that charges your mobile device. The whole rig is about $500 and $12 per fuel module. Eton was present with their collection of crank radios.

Many companies were making portable battery back-up units, either built-in to phone cases or the size of a pack of cards with power jacks. ** I am a fan of MyCharge because they include the two common cables built-into the units. Their iPhone 4S model called the Summit 3000 has speech announcements of battery level.  Mophie has the famous Juice Pack and other nice units. Dexim has a very thin 2000MA iPhone 5 case battery coming out.

I am excited about the Dacor Android oven control. I heard that LG had something as well. There were certainly many companies advertising home appliance control. Not sure if any are really shipping. I know from many years at CES that half the emerging technologies I have seen at the show never see the light of day.

Several companies have cell phone signal boosters and I have tried 3 models, one with moderate success. ** I will be trying the Wilson 40DB booster when it is released for use when in a car.

Keep the Netamo weather station in mind as a gift item. The iPhone app is quite accessible.

I love it when companies have a clever idea, whether or not I will use their product. The Kubx phone case speaker mechanical sound booster is like that. There were at least two other companies doing something similar, one for an iPad. RCA’s Sound Stream was definitely unique with its means of amplifying the iPhone speaker combined with a range of home electronics.

** I will be getting the mini Bluetooth speaker from Felt Audio and maybe the BT shower speaker from Ion. Since I already have a Belkin Wemo plug sensor, I will try out other models for controlling lights and such.

I am an active user of rubber bands for keeping cords coiled. I hope the Cord Cruncher way of sucking earbud cords together will find its way into other cord products. It is kind of expensive but the Globatrac luggage tracking device is intriguing. I’m Here is  a very small GPS box that is also meant for being tracked, either at a programmed rate, like once an hour or it can be remotely woken up from your personal tracking web page. They were talking $169 per unit, which is a lot for something that has $5 worth of parts in it.
I was disappointed in what I saw of the Panasonic Viera talking TV but two other blind folks at the show reported that it was a good step in the right direction.

I am in the market for a Windows 8 tablet with keyboard. Toshiba had one with a keyboard and with GPS on board. Several manufacturers had different approaches to how the screen would flip over, under or around. None seemed to have GPS other than possibly the Lenovo Helix. Its screen separated from the keyboard to become a standalone tablet. It has some sort of positioning as well as NFC. Microsoft was not at CES so no chance to see the Surface, which sounds to be similar to the Lenovo.

There were a plethora of headphones. I skipped over most of them unless they were high end. Sennheiser had some of the best, even $1,000 earbuds. The Destiny TTR is $300 from House of Marley and sounds really nice. The Monster Inspiration sounds beautiful. Their DNA series and others have a jack on either ear so you can chain multiple headsets together. Carson’s Grado SR80 headphones may be the best value at $80 for excellent sound.

** I will get the Gatekeeper Bluetooth garage door opener from Cobra when it comes out. Not really something necessary but quite clever and innovative.

** The Apigy Lockitron is a Bluetooth add-on to your door’s dead bolt lock. When linked with your mobile device, you can control it remotely or it will unlock and lock based on your proximity to it.

We are doing some landscaping so I’d love to have the Ion round planter or rocks which have Bluetooth speakers in them.

** The AfterShokz bone conduction Bluetooth earphones are a must purchase for anyone using a GPS or mobile device where you need to hear your environment.

Other than my iPhone, the product that gets the most daily use is my Bluetooth earpiece. If I were to buy a new unit today, I’d get the Plantronics Voyager Legend. It is not the smallest unit, which might be the Plantronics Mark 2. The Legend has 3 microphones for maximum noise canceling, a longer mic to get close to your mouth and a sleek carrying case that doubles as a battery charging pack. Plantronics had something like this in their Discovery series. As far as I know, only the Blueant and this new Legend have the ability to answer or ignore a call with your voice. This is essential when your hands are tied up with a cane or dog.

** ClearSounds makes a combination land line-cell phone unit. It has one connection for a standard single line cordless phone and another for an iPhone. You can then use the cordless phone to answer an incoming call on either your land-line or mobile phone. The I700 has nice tactile buttons on the cordless. The I800 has the addition of built-in speakers but the cordless handset is completely flat with touch buttons.

** The Blue Mikey is a module that plugs on the bottom of your iPhone to provide high quality stereo recording.

I like the mini projectors, of which there are now many. There are versions not much bigger than your mobile phone.

I picked up a high tech baby monitor as a gift from NetVue, which could be used for monitoring pets or anything else in your home via Wi-fi and your mobile device.

How about a mouse that doubles as a handheld massager from the Art Factory. A German company turns your iPhone into a mouse with software and a 30-pin module for your 4S.

Fuse Chicken, I love the name, has a goose-neck style USB cable for your iPhone.

The Sensory Acumen scent generator has a cartridge with 6 scents. It is currently being used in the psychological treatment of vets but the idea has much broader applications. Think of it like a printer hooked up to everyone’s computer. When you shop online and are looking up coffee beans, that smell could be triggered on your scent generator. There is no reason scent cannot be added to the multimedia experience. Makes me think of the pine forests in the Disney Soaring over California ride. 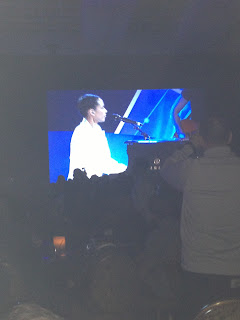 The Consumer Electronics Show would not be complete without the Monster concert. This year was Alicia Keys. The Paris Ballroom was filled to capacity with 5,000 people. We had a center table 40 feet from the stage. Awesome music; a wonderful break from the endless electronics and nearly 200,000 people.

To hear Mike May’s audio summaries of past shows, go to the Sendero Podcast link. Sendero does not sell any of the products mentioned here. Many will not be out for several months. Contact the manufacturers for more information. Contact Sendero for information about BrailleNote, Braille Sense and GPS products.