On May 13 Stevie Wonder turned 62 years-old and I think his voice is aging beautifully. I was invited to join Stevie's family and employees for a surprise party at the Sayers Club in Los Angeles. It is an intimate speak-easy type club with sofas and low stools. The sound system was fantastic. Rose pedals were spread throughout the club including in the bathrooms. Gena Harper joined me. All of Stevie's older kids were present.

They had told him they were taking him out to dinner so he was definitely surprised when he arrived in a club instead.

There was a DJ spinning a variety of music including Aretha Franklin when she was 19 years old. I wasn't sure who all played when the live music began. I know Kim Burrell from Houston was there. Stevie joined her and then some of his band jumped in as well. It was quite casual as various artists switched it up. 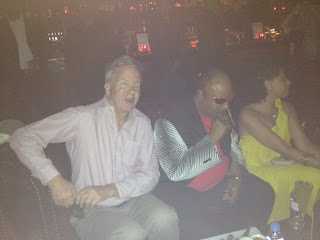 After a chocolate four-layer birthday cake arrived and we all sang the iconic Martin Luther King Happy Birthday To You song, the dancing began in earnest. Stevie's son Quame dragged Gena on to the floor and I soon followed.

From what my low vision could pick up, there were a lot of short black dresses and lots of skin with the occasional white, teal or red dress. Someone told me later Stevie had on red shoes. It was a very special and amazing evening. 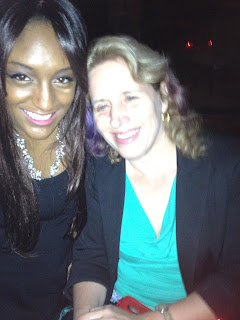 There was an amusing post script. When Gena and I got into a cab back to our hotel, the only thing I understood from the Asian driver's phone conversation was something about Stevie Wonder and a birthday. At some point, I thought he asked me if it Was Stevie Wonder's birthday and I of course said yes. After that, he started calling me Steve or Stevie.

When we got to the hotel, he asked in his broken English if he could please take a picture. I said why not and so he did.

I can only imagine when he texts the photo to his friends and says he drove Stevie Wonder, just how they are going to tease him.

2.5 hours after returning to our hotel, we headed for the airport and the return flight to Sacramento, only 15 hours after we had arrived the evening before.