The CSUN conference has a new configuration this year with exhibitor hours on Wednesday from Noon to 7 and none on Saturday. I think it worked pretty well.

Our iPhone session Wednesday was completely packed with people sitting on the floor and stacked up in the hallway. In the evening, we had a good 30 or more people in our suite just playing with various devices and socializing.

One of the more interesting items was a virtual touch technique for typing on the iPhone. You just put your fingers on the screen and the artificial intelligence of the software figured out the positioning of your touches based on your finger's relative position. When you finished typing a word, you just did a wipe and it would announce the word it thought you typed. It felt like it was reading your mind. Absolutely brilliant.

It is not a product yet, just a guy with a cool idea and first implementation trying it out on a bunch of blind users.

We'll see what we find today and we will have our first Seeing Eye GPS iPhone session to see what users of other GPS apps are thinking.

let the CSUN conference begin by Mike May

The best part of any conference is the networking. That has already begun.
For me, off to present at 8 AM this morning on an accessibility panel and then at 9:20 with Peter Cantisani to talk about all the cool iPhone apps and hardware we play with.
The exhibits are open today from noon to 7 PM.
Hope some of you on this list are attending. Come by Sendero booth 521 or ring our suite 968 around 9:30 or 10 PM to socialize.

more about GPS in Australia

Once again, I really took advantage of the GPS to explore independently yesterday. Having user points was really helpful in finding the exact ticket window to for the Manly ferry and even finding the steps to Manly beach once we got there. I remembered there was a really cool restaurant on the beach but not the name. I was able to search the nearby user points and was reminded once I came across the restaurant name.

The same happened when looking for this really good wine shop in order to bring a bottle to dinner with local friends having us over to dinner. Then of course there was finding their house and making sure the taxi driver took the best route.

It was pretty darn nice to be able to come off that ferry and find all of these things 100% independently in an unfamiliar busy city.

I will say the Navteq commercial points of interest aren't wonderful, something that would be true on both the Sendero GPS, Trekker and Kapten since we all use the same data other than our user POIs.

Now in Sydney by Mike May

FYI, I am now in Sydney to explore some more.

It has been one of the coldest wettest Summers in this part of the world but it is in the 80s now.

Mike May attended IMC14, the fourteenth International Mobility Conference, held in Palmerston North, New Zealand. The theme for IMC14 was "Mobility through the Ages: Up Over and Down Under". As such, they featured the newest in trends, practices and information related to the acquisition of independent travel for children, adults and older adults. 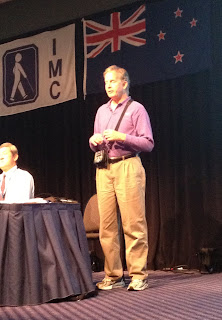 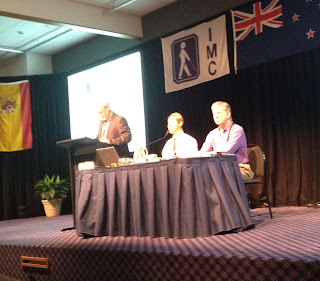 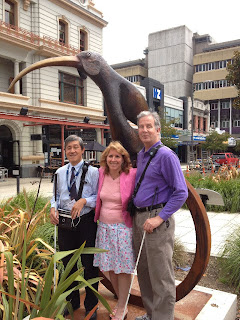 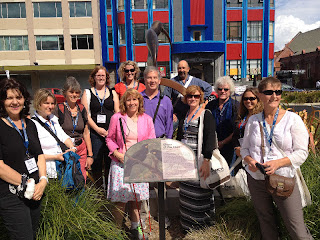 Listen to Mike's Interview about Mike's inspiring view where there's always a way to overcome challenges in life.

The interview discusses Mike's life, starting with him losing his sight as a child in an accident that almost killed him, continuing on with his childhood all the way through college, then on to his skiing experience and winning the speed skiing record, continuing with his travels, his start up businesses and his sight restoring surgery in his 40s, and finishing with what Mike is currently working on.

exploring Auckland by Mike May

I am currently in Auckland New Zealand in route to the International Mobility Conference on the south of this island. I don't think I'll ever get over the enjoyment and independence of exploring with the GPS. I have been in New Zealand several times before dating back to 1995. It is fun to see intersection points I marked back in the day when we didn't even have street maps not to mention favorite restaurant or pedestrian foot paths.

I think we will go look for the Sky Screamer which Charles and I tried several years ago before heading to the airport. No telling what else we will come across in the process.