We had a very full 4 days in London. Mark Pighin and I arrived early Wednesday morning, checked into our hotel in the Docklands, London's east end, and proceeded to familiarize ourselves with the vicinity for upcoming demos. We were a couple hundred yards from the conference center and on a tributary to the Thames called Victoria Dock. Most of the restaurants were in hotels, kind of like the CSUN conference area, not too exciting. Ilona joined us in the afternoon. She had come from Holland with a friend who was off scouting locations for a novel she was writing. 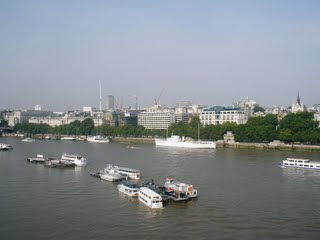 For the evening, Mark and I took a taxi into the heart of London to the oldest Indian restaurant in London, since 1926, called Veeraswamy. We were joined there by Annabel, the documentary producer from the BBC and Keith Harris, Stevie's tour manager who I became friends with via several concerts last year. 16 hours after we landed from our flight, we were finally in bed having mostly avoided any jet lag.

True to form, Mark was banging around and asking me about important things like RC3 somewhere around 3 AM. We at least got 4 hours of sleep or so. We did not have a booth at the conference but we did have the GPS Concierge table.

I gave a keynote speech at the end of the conference banquet Thursday night and the feedback was very positive. Here are some snip-its from Mike's keynote speech.

On Friday, I gave a GPS overview workshop which went very well and I met more interesting people afterwards. In the evening, Mark and I went to dinner at a Caribbean place with Ilona and her friend, Marion. We had a fabulous server who spent lots of time with us and really made it a special dining experience.

Neil along with his driver, Martin, arrived at our hotel at 10 AM and we took the elevated rail called the DLR into London together. We went to the OXO tower on the Thames for morning coffee with the other BBC producer, Ally, her husband and 3 year-old boy Satch. I just love both of these BBC gals. Ally is an absolute hoot and we had a great time catching up. We sat on a balcony having our drinks and overlooking the boat traffic on the Thames on a very pleasant morning.

Then we walked all over London, to Hyde Park, Covent Garden the Texas Embassy, while testing Kapten, Wayfinder and the BrailleNote side by side.

We had high tea at the Ritz, complete with our coats and ties and all the formality that surrounds this rich tradition. 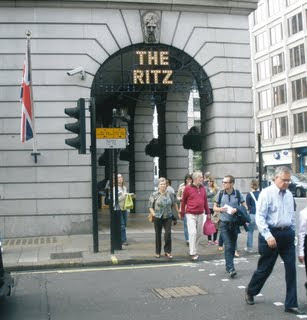 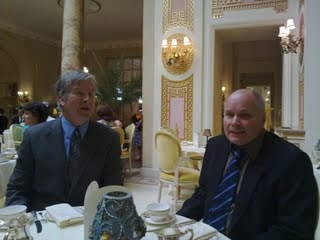 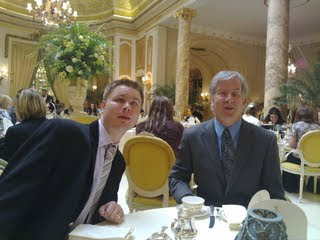 We continued to walk around after that, eventually ending up at a massively crowded pub called the Porter House. Then we had coffee at Nero. From there we searched our GPS units for a wine bar and found one called Slightly Oliver, which was actually renamed Bacco. We introduced them to the American concept of flights of wine. 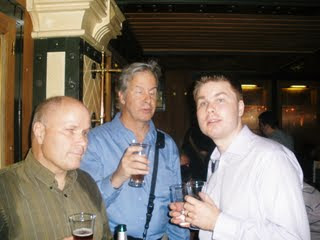 It started raining lightly so we walked briskly to the grand finale of Saturday, dinner in the dark at Dans Le Noir.

The way that it works is first, you leave anything that might emit light in a locker like a phone or watch. They go over the menu options with you which are very general. You pick fish or meat and explain anything you don't like.

Once our table was ready, our blind Italian waiter, Roberto, formed a train, each of us holding the shoulder of the person in front of them, me, Mark, Neil and Martin. We entered the black dark dining room which we soon learned had 6 tables of 10. Roberto explained our place setting for us, then brought water and wine. Two couples joined us at our table. We had 3 courses and had fun guessing what we were eating. It was particularly fun to see how Martin was dealing with this. We taught him how to pour water and how to keep track of things on the table.

The most fun for me was listening to all the sighted guests around us and talking to our table mates. The energy was incredibly high. Everyone was cracking up as they bumbled along, completely inept at this experience of eating and drinking in the dark. There really wasn't a glimmer of light anywhere. I was told they have infrared security cameras. The waiters were amazing, really moving quickly among all this chaos. We heard 3 crashes of stuff in the beginning of the meal but then nothing after that.

Martin said it was fun to do once but he wouldn't do it again. I really enjoyed the experience but I didn't think the food or wine was particularly spectacular. The emphasis was on the process of dining in the dark and perhaps not enough on the food quality. I would like to try another of these in another city.

Around midnight, Mark and I arrived back at our hotel, caught a few hours of sleep and then headed off to Heath Row for our respective flights to Dublin and SF.