Ten years ago, I took a trip alone to Europe and wrote a story called, The People Make the Places. This is equally true in a slightly different way on this trip to Spain in 2009 with my family and 6 close friends. I met Anne my second year at Davis when she responded to an ad for a reader. I am now Godfather to Anne and Tom’s daughters Laura 16 and Colleen 13. Our families have shared a vacation together every year before and after kids for a good 25 years. Anne’s roommate at Davis, Nadeen is Godmother to the girls. Not sure if that makes her my Godwife, wishful thinking perhaps. Her husband of one year Bob has been adopted by this mini network of old friends, 37 years plus. Jennifer, Carson and Wyndham are right in the thick of this experience as well. 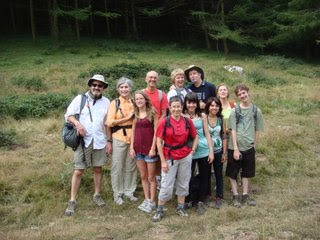 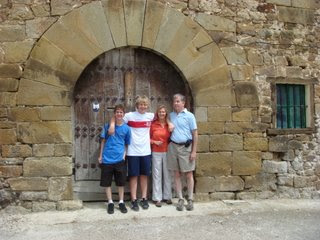 Our trip consists of two weeks including the flight days. Our primary mode of transportation is our feet plus buses to expedite our tour of the northern part of the Camino de Santiago. We first met up in Bilbao for a few days and then moved on to Pamplona where we connected with Nadeen’s Basque family. They figuratively and literally embraced our entire group of ten, showing us around towns, loaning us 2 cars, taking us on a hike and to their home. We stayed in a charming 300 year-old 6-bedroom house they located for us in the village of Aldatz. 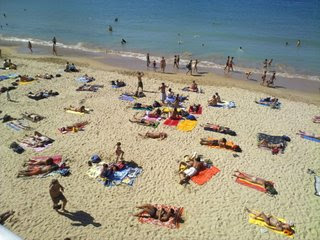 Most exciting for our kids, their teenagers took ours to a festival in a nearby village, Etxarri-Aranatz. This was a major challenge for us parents because it was unlike anything we would condone back home. Tom, Bob and Nadeen delivered our kids to their house at 10:30 PM Saturday night where the kids took a very crowded bus to the festival village. Dancing started around midnight, mind you, we were not tagging along. The teenage girls, Mar and Ane had texted all their friends who numbered over 30 and they took our kids into their midst after the traditional 2-kiss greeting. 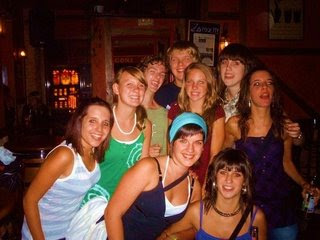 The kids moved as a giant pod around the festival with live music complete with their version of a mosh pit. Half the dances consisted of holding hands and dancing as a group. Wyndham said it was like a wedding where dances are official and not the typical pop American random dancing.

We were a bit uncertain about the details of this festival ahead of time. Bob said he pictured that it would be a long tent, with tables. There were in fact several hundred people from small children on up in age and they all flowed in and out of the packed bars. It sounded to me like Bourbon Street in New Orleans but a safer version.

Since we had a bus to catch to another town the following day, our kids were picked up around 2 AM, long before the locals would call it a day. They said they were disappointed to leave so early but thrilled to have had such a unique experience.

The entire Santiago de Compostela trail is over 700 kilometers in length. This was hard to imagine after we walked a mere 20 kilometers from San Sebastian to Zarautz. Some of the trail is along the ocean with beautiful vistas. In other parts, I found myself stumbling along a narrow trail with what I call coboulders, monster cobble stones. We went through pastures, saw cows, horses and goats and a fair number of homo sapiens also walking or biking the trail. 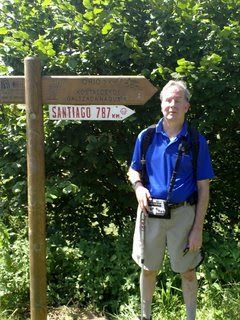 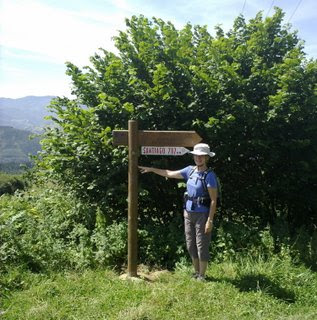 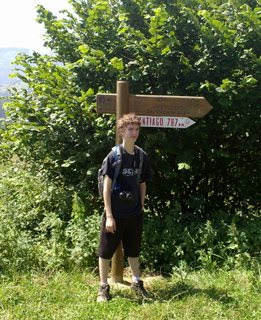 Occasionally we would welcome a village in our path replete with several churches, bars and restaurants, quite charming and hospitable. I clue myself into the Basque word for thank you, ezkerri asko, by thinking, “Scary Cosco.” The names of all these villages and streets are quite interesting.

I have been recording GPS points of interest as well as GPS Replay/trace files of our official walking segments. Although the Roundabouts wreak havoc with the route calculation, it has been very helpful to know where our various destinations are. Now that I have these Replay files, it might be fun for some blind folks to lead a trip in the future along this historic trail in the spirit of Lieutenant James Holman, the blind adventurer from the early 19th century.

We have 6 more days and will walk at least 100 kilometers before returning to our starting point, Bilbao and the long flight and sitting trip home. Perhaps it will feel so good to be off our feet by that time that we won’t mind. By then too, I will have to learn the Basque words for goodbye to go along with thank you. Sure is a lot easier to stick to the double kiss. 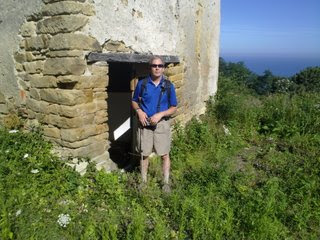 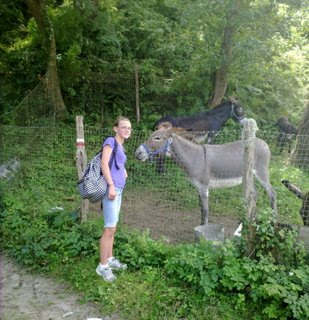 By the way, we were christened Los Vivadores, by an old man we passed on the trail and it means those who live life to its fullest. I feel pretty darn blessed to have shared this living of life with such a wonderful group of like-minded walkers, eaters and adventurers.

On and off the Beaten Path
Camino de Santiago continued.

Here are some highlights of the 7 segments of the Northern Camino we traveled, 144K (89 miles) on foot. I am astounded how well maintained the Camino is. Sure, there are some very dicey sections but it is well marked with yellow arrows either on the ground or on plaques at intersections including X-signs indicating which way not to go. Some steep trails have steps carved in them. We passed guys sweeping the parts that were on sidewalks and paved paths. In the sections that went through pastures, you were mostly on a fenced path, separate from the cattle. There are tunnels that go under busy roads, not that there aren’t a few sections on a narrow shoulder. 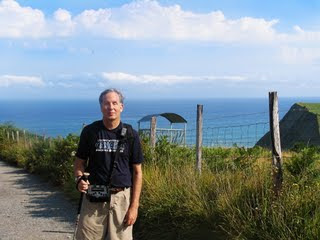 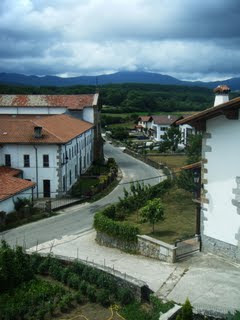 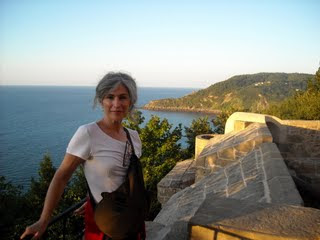 I am also pleasantly surprised we were never hassled by the people whose back yards the Camino passed through. Most dogs were tied up although there were some that were loose and intimidating but no real problems. Everyone was friendly on the Camino. We passed one couple in bare feet. I hear there is a section people supposedly crawl on their knees.

We read that the average rain fall in this region is 3 inches in August but we never faced a down pore, just a few sprinkles and mostly beautiful cool weather. Some of the foresty sections got pretty hot and steamy.

I love how, out of nowhere, you would come across Saint Martin’s church from the 13th century or at the intersection of two dirt trails, there would be a sign for a bar. Frequently, there were benches and occasionally drinking fountains. Every village, no matter how small, had at least one church and a bar/restaurant. We attempted to taste the helado in every town. Nadeen introduced us to a local plum liquor called Patxaran and a wine called txakoli. 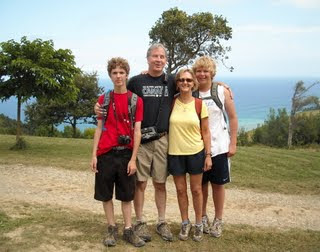 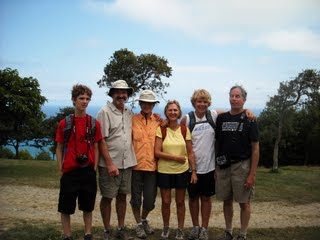 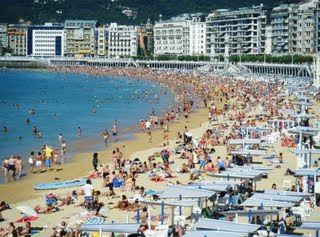 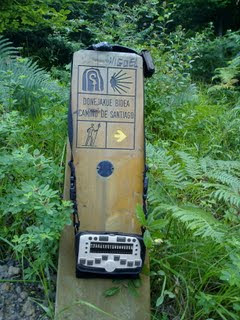 The six parents on the trip were thrilled that the 4 teenagers never complained and in fact reveled in the trek. Our B&B hostess in Lezama noted how unusual it was that our teenagers joined us for dinner and for being on such a trip together in general. We gave thanks for their young eyes finding those yellow Camino arrows. There was one section of the Camino that curved about 90 degrees in one mile along the shore. We commented kiddingly that it would be a lot shorter to swim in order to cut the corner. So Laura, a star member of the Vacaville High School swim team, did just that. She swam a good half mile in open water and met us on the other side. All the kids were very impressive and the old grownies didn’t do so badly either, including one who became ill, took a day off and bounced back to complete the trip. Walking 10 to 18 miles a day with tough climbs and tricky terrain was not insignificant. I’ll take 3 miles of flat road over 1 mile of rough trail any day and there were plenty of both. 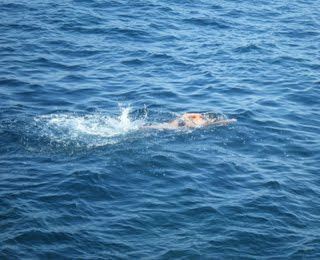 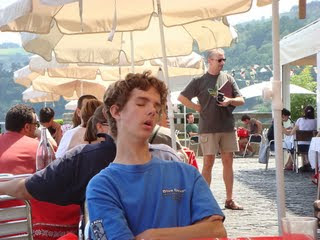 I brought one trekking pole rather than a traditional cane for mobility on this trip although if I’d known how challenging some trails were, I would have brought two trekking poles. Whoever was in front of me took on the role of guide and everyone was great. The hardest parts were impossible to describe so I just plunged forward with the trekking pole and arrested myself with every step. I wasn’t graceful but I managed. I only fell once completely because of really loose dirt where I suddenly found myself flat on my back kind of like a slide into second base. I wished I had my Seeing Eye dog Miguel much of the time but some of the steep downhill trails would have been impossible to walk side-by-side. The loose dogs would have also been a concern to me but 90% of the trip, Miguel would have loved and I would have enjoyed having him guiding.

We did modify our trip a bit on the fly, realizing that we were spending so much of our time walking that we weren’t totally appreciating the neat towns we were staying in. We have decided that the ideal trip for a full Camino experience with exercise, culture and a little relaxation would be to walk every other day and tour the towns the other days. For example, one should not miss the peace museum in Gernika, which was bombed by Franco, Hitler and friends on April 26, 1937 to test out the latest war technology. It was sobering for all of us and very much a part of the Camino and the Basque country and culture. 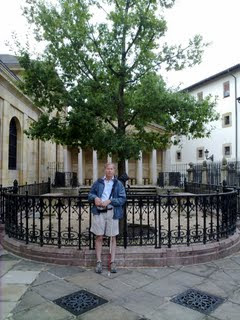 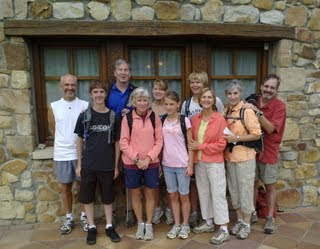 There are buses and trains connecting most of the little towns so a hybrid foot/vehicle trip makes great sense. I suppose true pilgrims would walk and/or crawl the entire Camino but us Vivadores designed our own very memorable version of the northern section of the Camino. This trip certainly ranks as one of my best-ever travel experiences and I believe the extended Vivadores family would agree.
Sounds of the Vivadores walking the Camino.