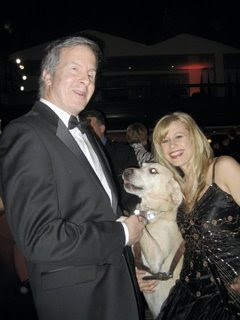 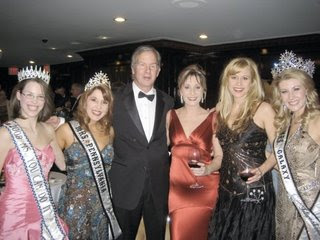 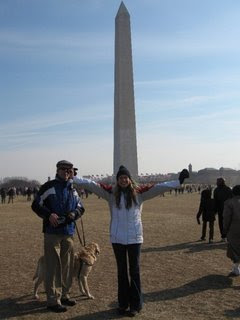 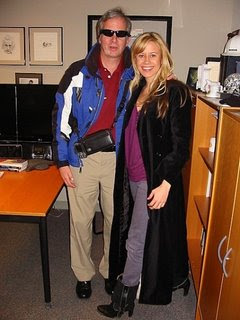 I waffled considerably about whether or not I should try to attend any of the inaugural events. Two things tipped the scale and I am very happy they did. Ginger Kutsch told me about the ball she and Jim were attending and Sara Beck said she was going just to hang out without tickets to anything, just to be among the revelry. Once I received an invitation from friends to stay at their place, I booked my flights.

I arrived on a delayed flight Sunday, January 18, and changed into my tux on the way to the Disability Power and Pride Inaugural ball, where I met Sara Beck and her sister Heather, my dates. There were 1000 people of all disabled flavors. There were senators and congressmen who wanted to give long speeches and all the crowd wanted to do was to burst into cheers every 30 seconds.

My only lament was that there were probably lots of blind people I knew at the ball but we had no way of recognizing each other.

Nonetheless, we met lots of interesting people we didn't know including 3 state beauty queens with flowing gowns and crowns on their heads. It was interesting to hear everyone's story of why they were there.

Sara, Heather and I danced along with Miguel who would not have stood for being separated from me. It was all pretty fun and crazy.

Sara and I spent Monday at National Public Radio, hosted by Mike Starling who I met at CES. We got the grand tour, met lots of people I have listened to for years on the radio and Sara and I were interviewed about the unique way we met.

Not having connected with Stevie by Tuesday morning, Sara and I and her friend Ashley met near the Mall to see how close we could get to the inauguration. The logistics of moving around Washington were incredible. They took the metro and were delayed because a woman fell under the train and they were all stopped. The bus dropped me many blocks from the mall and I had to walk through the freezing cold for quite a ways to our meeting place.

We joined the crowds flowing toward the mall and just kept winding our way closer and closer to the main event until we had a good monitor to watch and good sound. We were in a sea of people, shoulder to shoulder on the grass beyond the reflecting pool between the Washington Monument and Lincoln Memorial.

The crowd interaction was fascinating, hearing different accents, comments of where people were from, how they got there, gasps, groans, boos, cheers, clapping, shivering, crying...
When we finally heard the oath, I felt like I let out a breath I had been holding for 8 years. We cheered and hugged knowing this was an experience we would remember forever.

I couldn't help wishing our boys were there too. I had a mileage ticket for Wyndham, which I gave up when I couldn't confirm tickets. In the end, we had an incredibly rich experience in the middle of the masses rather than among the elite. Turns out a lot of people who had tickets couldn't get in because of some mix up.

It bordered on scary leaving the mall. There was no security or anyone directing traffic. We were like molecules in a stream, just flowing into the path of least resistance. When we came to the line of porta potties, we just bounced off and kept flowing. Everyone was very calm and nice about it but the slightest panic could have created a mess. It helped that I had recorded some GPS markers on our way into the mall and Miguel did an amazing job guiding amongst the dense crowds.

We had to walk for miles to find a business which was open and by that time, we were frozen. We thawed out in a pub and relived our experience as we watched the parade on television. We really didn't want the day to end but at the same time, we felt emotionally exhausted. I still can't believe it actually happened and I got to be a small part of Barack Obama's inauguration.