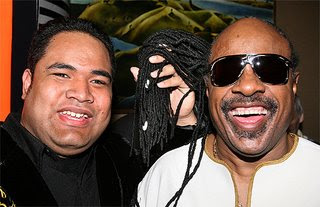 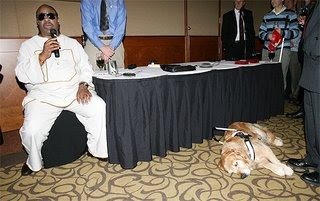 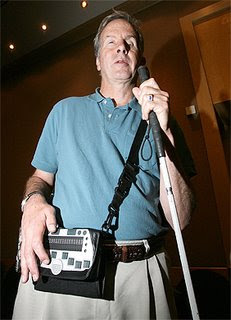 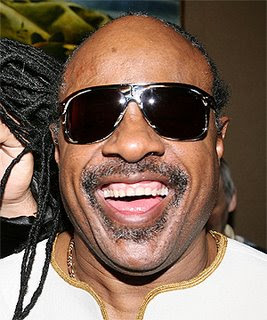 American superstar Stevie Wonder loves technology and what it can do for the blind.

"It's a feeling of being independent," he told an Auckland gathering to launch a New Zealand version of a GPS system for blind users.

A Californian company, Sendero Group, developed the remarkable device which not only gives voice directions to its blind users, but is also a powerful internet linked computer.

Wonder is an old friend of Sendero founder Michael May who confessed he used the launching of the New Zealand version of the GPS system to catch the star's Christchurch and Auckland concerts.

It coincided with Blind Week, the Royal New Zealand Foundation of the Blind's annual appeal.

As a measure of his fan quality, May said Apple iPods have only, in the last month, become blind accessible after lawsuits in the United States.

He got one and the first thing he loaded up was 585 of Stevie's songs.

Wonder, a big user of technology, said he wanted to spread the message of accessibility for the blind. Video of event and Stevie Wonder's speech

"It is so very important in the sighted world and those in the various places of technology understand that by doing this you are getting a kind of freedom you cannot even imagine."

Technology was making life easier while being fascinating and exciting.

"It's a wonderful thing. Life is about creating joy and making things better."

May's own story is as remarkable as Wonder's. Video of Mike May's Speech

He was blind for 43 years and yet managed to clock a world record speed skiing record - more than 100 kph - got married and had children, changing nappies from the day they were born.

Then came the day the Californian, blind from the age of three, was given the option of getting back his sight and seeing his wife Jennifer for the first time.

Did it ever worry him, as the bandages came off, that he might not like the way Jennifer looked?

"This was the fear of a lot of my female friends and family," he told Fairfax Media.

She wasn't worried and nor was he.

"She was self confident about that, the real beauty of the moment, was that she was there to share the new images with me.

"I knew exactly what she looked like, there was no revelation."

The one eye that gives Mr May 20/80 vision is nearly perfect anatomically, but he cannot see detail as well and still uses a cane or a guide dog.

The GPS system, which fits onto a Braille interfaced and sound enabled device that also provides internet and email, gets the user into the vicinity of where they are going.

"It doesn't make me a blind robot," he said, adding the vision impaired were happy with cane or dog.

The Sendero devices come with "a look around mode" that announces to users what is around, without the need to enter commands.

"The number one challenges is no longer the technology, it's the affordability."

"It's really important to get funding to help purchase these things; the cost is the barrier now.

"It's like buying a car for a job; this isn't something I am doing to find the local pub, this is so I have the independence to get a job, change a job, to do things with my family, its part of my whole life navigation system."

He lost his vision in a chemical explosion but said he had long come to terms with it.

"In fact it is more about living life to its fullest," he said.

"If one has a good family, a good job, feels good about themselves and all of those positive things, it doesn't matter if you are blind or sighted.

"Being able to see, for me, is icing on the cake, it wasn't something I really felt I needed to do."