"You're Going Around in Circles" By Kevin Chao

Today was the first full day for the WayFun group in Victoria, BC. We started the day by breaking up into several groups of 4 to 6 people. There was one group that went GeoCaching, one that went to Butchard Garden, another to a castle and another to High Tea. Oh yes, there was the shopping group. The main point was to use our GPS to explore a city in which many of us haven't ever been to before.

Gil and I were in charge of the group that went GeoCaching, our group members included Sandy, Dena, Denver, and Greg (two dogs and two canes). We stumbled upon five of the ten GeoCaches in Victoria, the most notable of which was called, "You're Going Around in Circles Anyways." As a group, this was the way we felt while finding these GeoCaches. Even though we were going around in circles, we always knew where we were and where we were trying to go to because we had the Sendero GPS along with our other tools and techniques for exploring a new city on a beautiful day. We even found our way back to our base hotel, the Traveller's Inn, Down-Town. 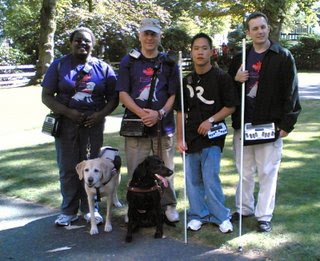