I had the unique pleasure of spending May 15 with two good friends, Stevie Wonder and Rob Reis. Rob is a friend since high school who got me involved in ham radio, engineering at UC Davis, skiing and start-up companies.

We had dinner at Mr. Chow's in Beverly Hills, a regular celebrity hang out and a place I have been to with Stevie numerous times. For example, actor Jamie Fox sat down at our table for a visit. I showed him my new book and mentioned a movie was being made. I asked him if he was interested in playing another blind guy, having played Ray Charles in the movie Ray. He chuckled.

Actress Stephanie Powers stopped by to visit with my dog Miguel. She has 7 rescue dogs. I didn't know who she was but a Google search showed that she had a star on the walk of fame and a lengthy acting career.

When we left the restaurant after 1 in the morning, 15 papazzari still lined the sidewalk. Stevie was their only fodder. He adeptly turned the situation around and had a little fun with them, taking one of their cameras and filming the papazzari. It was pretty funny but a previous incident with the papazzari wasn't so funny when they lied to Stevie, saying they just wanted an autograph and then they posted cell phone video on the same site, making fun of him. I found them despicable but Stevie graciously takes it all in stride. 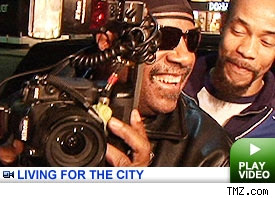 See the video of the Stevie and paparazzi interaction