Warren Miller, a hero and mentor

It has been five years since we skied with this icon of the ski industry, Warren Miller. He is now 82 years old and still skiing regularly from his home at the private ski resort in Montana, the Yellowstone Club, a place so private the final roads to his house were not in my GPS database. Fortunately, I had marked some key points last time we visited so we were able to negotiate Big Sky Road to Ousel Falls road and beyond.
Lat, 45, 14, 45.1694 N
Lon, 111, 22, 33.1750 W 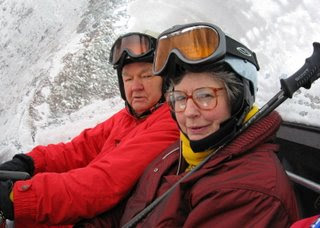 We were very fortunate to have fresh snow fall every night we were there and mostly sunshine during the day. It was dream ski conditions. Warren and his wife Laurie introduced us to fascinating people, all were entrepreneurs and self made millionaires. I felt in the minority not having my own jet or at least small plane.


What made the skiing even more special were the brief stops to catch our breath. Warren has a lifetime of stories and every stop was punctuated by nuggets from his 60-year history skiing and filming. My favorite fixture in his beautiful home was a 6 spoke Austrian wagonwheel over the dining table with a wooden figurine on each representing the chapters of his life up to its making. 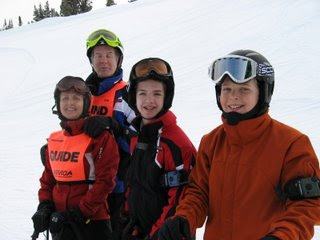 One of the first comfortable ski experiences I had after gaining some vision was with Warren in 2002. Here are my reflections from that trip.

(Two-year anniversary of gaining some sight.)

This experience had to do with a number of incredible circumstances all happening on one day in one place. First, I'll tell you what I experienced and then explain these circumstances.

I had a new ski guide, actually, it was the first time he had ever guided. My biggest fear when skiing as a totally blind person and for the past 2 years as a low vision person is running into or being run into by other skiers or snowboarders. On this special day, there were literally 17 people
on the slope, nobody to worry about running into, and no, we weren't helicopter skiing. That is definitely on my list of future stories.

With this new guide, I had to depend upon my vision because he only talked occasionally. This was nice because I was able to savor the silence that only 2 feet of freshly fallen powder snow can bring. I don't think my guide knew he might be guiding that day but conveniently, he had on dark clothing. Being a big guy, he was easy to see up to 50 feet away unless he blended with tree shadows. We had sunshine so this did happen from time to time.

When I would lose my guide in the shadows, I would focus on his ski tracks. This is one of the benefits of 17 people skiing on new powder in the Montana Mountains; most of the tracks you make are distinct. A skier's dream, FRESH TRACKS!

I would follow his tracks until I picked him up visually or heard him calling to me. The snow was so quiet; I definitely could not hear his skis especially since I wasn't worrying about being close behind him.

Jennifer and the boys were nearby too. Jennifer was enjoying her day off from guiding since I had spontaneously commandeered this novice guide
into service. We were all in awe of the sunshine, fresh powder, fresh tracks and absence of people. Imagine, 8 chair lifts, 2700 vertical feet of skiing over thousands of acres. The chairs even had covers to protect against the cold Montana air on the ride up the hill. At most ski resorts; I look for the bump runs because that is where there aren't any people. What a treat to be able to ski anywhere on the mountain and maybe pass one skier each hour. Imagine, still getting fresh tracks at 4 PM in the afternoon. In my dreams!

Our lunch break reminded me of skiing in Europe. We skied up to the mid mountain log cabin chalet style restaurant. You could take your boots off and put on slippers during lunch. White linen adorned beefy plank tables. Gourmet food and service belied the log cabin setting. To cap off the dream,
our boys, Carson 9 and Wyndham 8 years old, were patient over lunch and contributed to the conversation about politics, skiing and owning a piece of
this paradise.

Even after lunch, we managed to find fresh tracks. It was so fun visually to be able to see a slope with tracked and untracked snow and to be
able to aim for the untracked powder. The few tracks that there were, carved fascinating designs in beautiful contrast in the snow. My guide's tracks were wonderful dark S patterns etched in the white snow. I could almost follow them, some of the time. Suddenly, I couldn't see the tracks or my guide as I found myself in a big cloud of white snow powder. At the last second, I caught a glimpse of something dark in the snow and swerved. My ski tip and pole made contact with something hard, presumably my guide, half submersed in the powder. This was one of the downsides of a rookie guide and a rookie low vision person.

I was so enamored by the fresh tracks and the sounds of silence, I wasn't paying attention to where I was going and nearly decapitated Warren
Miller and there wasn't even a camera there to get it on film.

Did I mention that my guide was Warren Miller, famous filmmaker of hundreds of ski, snowboard and other movies over the past 50 plus years?
That is who guided me, all day. At 77 years, he is still skiing 100 or more days a season. His tenacity and firm hand shake were evidence of a person in excellent shape. Thank goodness for me, we stopped ocasionally to let the kids catch up.

So, here we were, at a private ski resort, the Yellowstone Club, 2 feet of fresh powder, the slopes nearly to ourselves and being hosted by Warren Miller, a man whose philosophies and lifestyle have inspired me since I first met him in 1988.

Ron and I had gone to Snow Mass/Aspen to compete in a speed skiing event at the last minute; the event organizers were told by the insurance company that the whole event would be cancelled if "the blind guy goes out of the starting gate." After preparing for the event and coming to Colorado to
ski with the likes of Franz Weber and Steve McKinney, we were devastated to have to pull out of the event. I have spent my life finding ways to do things people told me I couldn't do and I hate a situation where I am thwarted.

Up skis Warren Miller who says, "okay, don't go out of the starting gate. Start to the side or right below it." Now, why didn't I think of that? Just when I thought all options for speed skiing in the event had been exhausted, the master of finagling and ingenuity came up with a solution. The rest
is history as recorded by Warren Miller's film crew for the 1987 feature film, Beyond the Edge, Mike and Ron speeding down the racecourse at Snow Mass,
Colorado.

Little did I know in 1988 that 15 years later, my family and I would share an incredible day at the Yellowstone Club in Big Sky Montana with Warren
Miller. Heck, I wasn't even married when I was speed skiing. One just never knows where speeding paths will take us. Only one thing for sure, if you don't get on the speeding path, you'll stay put. The good thing about a mountain, snow and skis, it's easier to go somewhere than it is to stay put.
Just think, the speed skiing led me to Warren Miller. Warren Miller led me down the beautiful slopes of the Yellow Stone Club. Now, where will that lead me next?

The boys seemed to think having our own place in a skier's paradise like this would be okay with them. In my dreams? Why not? Stranger things have come
true. Like, for example, speed skiing with the world's fastest skiers, being in a Warren Miller movie, being able to ski together with my wife and boys, on fresh powder with Warren Miller and 17 other people, actually using vision to see where I was skiing after 43 years of not seeing. In my
dreams, in my reality.