Exciting, intense, funny, intriguing, fascinating, exhausting: these are just a few of the words that come to mind in trying to imbue what goes on in five days of adventure when 31 people from 7 states meet, learn and set out to see what they are made of. Here are a few stories and snippets about the people who defined WayFun 2006, from the Napa foothills to the streets of San Francisco.

Kevin is a 16 year-old from Stockton CA who has only been using the Sendero GPS for less than a year and yet, he was teaching others as well as finding his way off-road at Enchanted Hills Camp, where he had never been. His skill and confidence along with his cane and BrailleNote gave him the tools and techniques to explore, discover, get lost and get unlost.

Kevin and others were learning by example from our two Sendero super trainers, 71 and 72 years old respectively, Carl and Gil. Along with their dog guides, this dynamic duo guided WayFun excursions from Chinatown to the Titanic exhibit at the Sony Metrion. Their patience and energy are titanic in their own right.

Our youngest GPSer is Adam, 10 years-old, from the Poconos of Pennsylvania. He and his mother, father and brother Jake drove cross country to WayFun in a motor home. Adam has a thousand questions. His charming personality and inquisitive nature has endeared him to all of us. From 6 am to midnight, Adam explores his world and it is a treat for us old codgers to tag along.

On Sunday, we had five groups among 7 vehicles wandering the Napa and Sonoma Valleys. They found wineries, the Petrified Forest, the Old Faithful Geyser, the Charles Shultz Museum, Saint Helena, Calistoga, Santa Rosa and lots of good food. Jamie and I were in a roving vehicle and we had fun finding moving targets. When Chris G. called on the two-way radio from a restaurant called Home Plate, which was not in my database, he gave me his lat/lon, I plugged it into my unit and followed the GPS route to his position. We then connected with Charles and Theresa at the Sterling Winery overlooking the valley. We managed to find at least five of the vehicles. 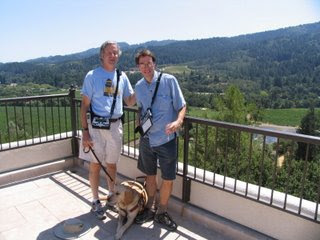 We had three distinct types of experiences: first at the camp navigating amongst trails and roads not on the GPS maps. Then we were in vehicles directing our drivers to various locations over an 80 mile area. And finally, we were in San Francisco, mostly walking, and finding our way amongst the streets and tall buildings.

On Monday, in “the city”, I decided to stay with one group rather than bouncing around as I did the prior day. One group went to Chinatown, another to Pier 39, another to the Metreon and I volunteered to lead the “alternative tour.” I pitched this tour as more about the process of exploring rather than about the particular destinations. Sound familiar?
I set out with Mark, Cathy, Jim S., Ginger and Jim K. Our first stop was Starbucks. Not too hard to find one of those. After being fueled up, we searched for and set the Saint Francis of Assisi statue as our destination, about .75 miles line of sight away. This did not account for the steep climb up Powell Street to Pine Street. The tricky part was finding the narrow alley between two flats where the statue was located. Having been lead there before by Jerry Kuns, I recognized a set of stairs at Pine and Dashiell Hammett streets. 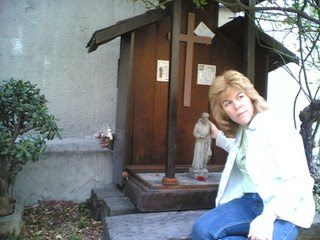 The statue is smaller than I remember, just a foot or so tall tucked under some sort of thorny tree or rose bush. We all crouched down and checked it out thoroughly before searching for our next stop, a chocolate shop.

It was located two blocks back down the hill. We found it with only one bit of wandering on the wrong side of the street. It wasn’t really worth the stop but like we said, it was about the trip and not the destination.

We set my favorite San Francisco anomaly as our next target location. I didn’t tell the group that this would involve going back up the hill and then some. We climbed up to the crossing of cable car tracks at California Street, and then descended down Powell Street through the upper edge of Chinatown. All our systems said to turn left to head West on Green street, up another set of hills. We had a pretty agile group and we moved at a good clip with 4 dogs and a cane. I teased that we were just helping Aerial keep in shape for the International Rowing championships in the UK next week. She informed us she had already worked out earlier in the morning.

After finding Macondray Lane, a quiet wooded path between houses, we sat on the sidewalk of Leavenworth Street, taking a break and looking for a place to have lunch. Nothing like 5 BrailleNotes perusing hundreds of restaurants in the POI database. We settled on a restaurant in a Northerly direction. Settling on the cuisine was harder but we finally established Las Margaritas as our lunch destination and found our way there with only one wrong turn. We had a nice meal outside while listening to a musician in the plaza of the Cannery.

From the Cannery, we found our way to nearby Ghirardelli square, where part of our group headed back to the hotel, with chocolate in hand, while Ginger, Jim and I parted the waves of people along the fisherman’s Wharf walk with our three Seeing Eye dogs. It always gives me goose bumps to have Miguel work me through such dense crowds at a surging slow/fast pace. Our next stop was Pier 39, where we headed straight for the Fudge House. The GPS, our dogs and noses lead us straight in the door. This is a must stop on a San Francisco visit. While contemplating which flavor to buy, the words of a performer outside the shop filtered into my thinking. “Now, my mother and father were in the iron and steel business. My mother ironed clothes while my dad would steal.” Chocolate Peanut butter and Fudge Mint were the two fudges I selected. They are history as of this writing.

After 8 miles of walking and 7 destinations, we decided to grab a taxi back to the hotel so we could connect with the rest of the WayFun folks before we went our separate ways. We had a debriefing of the day’s highlights and one final drink together. I can’t say everyone subscribed to our group’s motto, “It is better to travel hopefully than to arrive.” I do think everyone made new friends and new inroads into their own level of accomplishment. I think everyone could say that their own personal bar had been raise and they had leapt over it, just like other WayFun pioneers have done in the three previous years.

Comments:
Hopefully, Way Fun will continue to be an annual event. We've been along for 3 of the 4 trips, and the people are always the most fun, and the wayfinding in cool locations is a blast. I would encourage others to make plans to join in the fun! Sue Sweetman