Through the woods to Grandmother's house we go 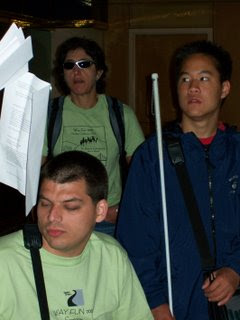 My name is Kevin Chao. I am a senior at Bear Creek High School,
located in Stockton, CA. I attended this years Way Fun event that was held
starting in Napa then we worked our way to San Francisco. We spent about two
day's average in each location.

The thing that really stuck out for me as a participant was the famous quote,
"it is better to travel hopefully than to arrive." I experience this on the
first night, while we were at Enchanted Hills. The famous quote started when
I was leaving from the camp fire and heading on back to the cabins for the
night. Instead of going uphill towards the cabin, I went down the hill,
through the woods, on a dirt path. I was stranded for about 2-3 hours. I
thought that it was pretty nice, especially seeing that I was getting closer
to my destination, but couldn't figure out the path to continue on through
the woods. I thought that enough was enough. I flipped on the GPS receiver,
used the blue and orange flashing lights as a tracking device, and yelled
the famous phrase, "help!" The moral of the story is , never go through the
woods alone, or in a unfamiliar place; always carry a radio with you at all
times, especially in a group; and the GPS receivers can be used for more
than its standard purposes--a tracking device.

I also felt that the famous quote arose while we were in San Francisco.
Since there are many tall buildings, which will make the GPS pick up
erroneous information, thus not allowing the user to rely on information
such as heading, instead one must rely on the "getting warmer method." We
got the message, "warning off-route," several times, it was nice just
problem solving and finding out what is really happening and picking up
again where you left off. It is a little tricky traveling with a big group,
especially a group over the size of ten. But, also at the same time very
rewarding, just imagine a 16 year old leading a group of over ten people. It
was a truly nice and rewarding feeling. I know that the members of the group
also had confidence in me, or else they wouldn't have had me as their
leaders. And, when we finally got to our destination, we got the nice
message, "arrived near destination," it is almost like a pat on the back.

This years Way Fun was really nice, and I am looking forward to what is
coming on down the road. And, for myself, I really did feel the sense of
traveling hopefully and enjoying each and every step of the adventure, as
oppose to solely focusing on my destination.