After a canceled first leg of our flight from Sacramento to San Francisco and a taxi ride instead, we barely made our flight from SF to Anchorage. By the time we got to the hotel, it was nearly 2 AM in the morning, Alaska time, an hour behind California. Nonetheless, the boys were wide awake after sleeping on the flight so we ordered a pizza delivered.

We got going on the late side later that morning but covered a lot of ground our first day in Anchorage. After breakfast, we explored our way to the Imaginarium, not worth the stop, more of a gift shop than an exploritorium as we thought.

Then we wandered through the local Farmer's Market, which had lots of fur objects, hats, coats, ear muffs and the like. 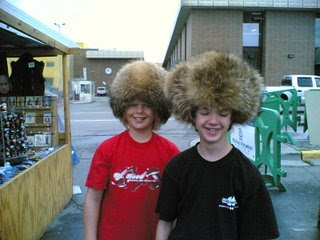 Miguel was extremely curious about all these animal skins. 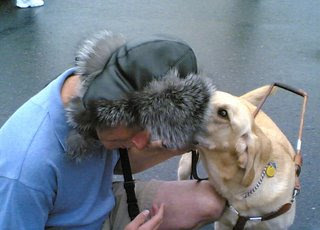 I liked the wooden walking sticks, flutes and even jewelry. We watched a performance by a guy who could tell you where you were from based on your zip code. The live music started out sounding like Johnny Cash but got unbearable, so to speak, when someone sounding like an out of tune Tiny Tim started singing along.

The Anchorage Museum of History was well worth the visit. There was no charge for the boys and they didn't charge me because they didn't have any accessible materials, neither Braille nor audio. The boys ended up being excellent tour guides however.

We spent over an hour in the rapture exhibit, the best I have ever seen. Wyndham read me lots of the exhibit descriptions and many of the birds were high enough contrast that I could make them out. The wings of 4 birds were laid next to each other for example so you could see the difference, the Condor at 10 feet, the Bald Eagle at 8 feet, the Red Tail Hawk at 6 feet and the Turkey Vulture at 4 feet. I particularly enjoyed the audio booth of owl calls where you could click on each type of owl and hear their sound. The burrowing Owl and the Spotted owl were both pretty unusual. The Barn Owl sounds more like a crow than an hooting owl.

The Native Alaskan exhibit was relatively tactile. There were various animals that had "do not touch" signs but nobody said anything when I checked out a Grizzly, a Musk Ox and a Moose. 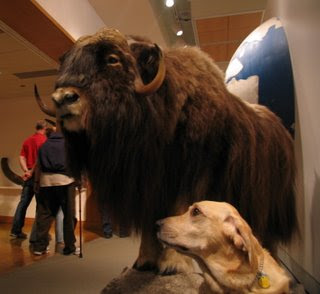 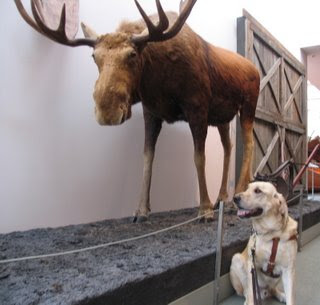 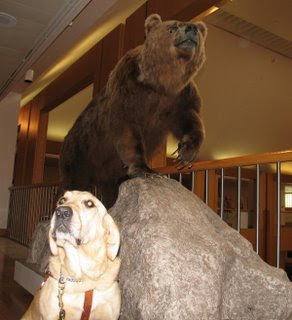 There were huts, forts and villages behind glass. You could touch the various boats and canoes. This was well worth another hour of exploration.

After a quick walk through some paintings, we left the museum and headed for Ship Creek where we heard the salmon were spawning. Sure enough, we found a bridge with a fish ladder and dozens of salmon were floating on both sides of the damn. Lots of people fishing down stream. I'll have to get someone to explain a fish ladder to me as this wasn't something the boys understood and not something I could touch.

We capped off our first day with an excellent meal at Sacks Restaurant and then ice cream at the E Street Ice cream shop. It is still quite light out at 10 PM. It has been cloudy most of the day and is just a little drizzly right now. Not a bad first 20 hours in Alaska.

Comments:
Ok...favorite pictures...the May boys in their fur hats and Miguel in front of the stuffed animals. Looks like a David Letterman skit.
Liz

Love the fur hats! Email me at walter@madbomber.com and we can see if we can find the Sendero 'boys' a new hat!