In some cultures, this means I have had too much to drink, in my case it means I have just been denied access and I am very angry about it. It takes a lot to get under my skin but there is something about discrimination that hurts to the core, literally a sick feeling in my stomach.

When we were in Costa Rica over a year ago, we tried to go on a canopy tour but got rained out. Our guide said that other blind people had done this before so there shouldn't be any problem. Nothing to be done about the weather so it didn’t happen and I never got our $150 back either.

Today, in Puerto Vallarta, we went to the offices of El Eden to take their tour. It was I and five family members ranging from my 9 year-old niece to my wife and our boys. I left my dog at the villa and when they saw my cane, they said straight away that I wouldn't be able to go on the canopy tour. The owners were called and they absolutely refused despite all my explanations about having gone skydiving and holding the downhill speed skiing record for a totally blind person. I said I could bring my walkee talkee radios but they would have none of it. The little 9 year old could do it but not a blind adult, no way, shape, or form.

It was very frustrating not to have any leverage. I considered walking out of the office and finding another company but chances were very good that the same denial would happen elsewhere. My family would have backed me up but I hated to have the kids again miss the opportunity for this spectacular experience. I couldn't bribe the company, there was simply no recourse.

So I paid for 5 canopy tickets and transportation for me. I figured there was a long shot that I could talk someone at the actual tour site into letting me go.

We clambered into this huge truck and proceeded to wind our way south of Puerto Vallarta several miles before we turned inland into the jungle. It was one bumpy ride, ending up at a very busy collection of bars and restaurants along a small river, the staging site for the canopy tour. It wasn't that far in miles from PV but it took 40 butt-pounding minutes.

I stayed with my family through the orientation. I felt the harness, helmet and the cables they would be sliding on. They would hike up about 1000 feet in elevation and then clip into the cables and slide about 1.5 miles at speeds up to 60 miles per hour. There was staff stationed at every transition point. The tricky part for a blind person would be knowing when to put on the brakes. A guide waves at you when to brake and when to stop braking. I figured this would be quite easily done by radio. They did have two-way radios at the staging area and I had to assume each of the guides would have radios as well.

One of the staff giving the orientation spoke English very well so I made my plea to him. We discussed how it could be done and he began to waver. He told someone else I wanted to go and they said no way.

So, here I sit, sweltering in the bar, drinking Pacifico beer and listening to the sound of the zip lines in the distance punctuated by hoops and hollers. I'll have to be content with my boy's excitement when they get back and relate the details. I hate that I am not being allowed to share the experience with them simply out of ignorance.

As we rode here in the truck, I had one of the boys on either side of me. Despite humid weather, they silently expressed their love and support by cuddling up to me. Occasionally one would say, "I can't believe they won't let a blind person do this. This is really stupid." I was thinking what an important lesson it was for them to experience discrimination first hand. They are relatively privileged kids, growing up in a culturally open community but without any exposure to race issues. How would boys in this environment come into contact with racial bias or profiling? When they saw their dad discriminated against, they could learn personally about that "back of the bus" feeling brought about through discrimination.

I will definitely be using this experience to teach them that there is always a way to do something. I will contact the management; I will find other companies in other countries if necessary until I can go on a canopy tour with my boys. Now I am motivated not only because of the thrill of the adventure but because of the quest to resolve the discrimination and to work out the details of how to best do a zip line for a blind person. There is another expression, which probably doesn't translate very well into Spanish, "It ain’ over until the fat lady sings." I can always fold up my cane, put on dark glasses and just won’t let on that I am blind next time. “I’ll cross that bridge when I come to it.” 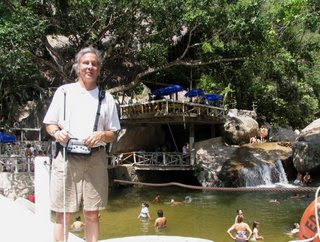 Villa Celeste is built into the hillside, 3 bedrooms on the main level, which is 15 feet above the narrow road and then a rocky beach. A more sandy beach is a few hundred yards up the road. Two larger rooms are on the upper level past an interim level with one of the three bars. There is a large pool and bar on the main level. The main dining area can easily seat 14; it is all open to the sprawling decks of stone pavers. The bedrooms are air conditioned. The entire villa is 16,000 feet. Five bedrooms, 7 baths. Four of the rooms have king beds, one has 2 queens. There are various sleeping pads or benches. Room 1 has the giant Jacuzzi. The view is West over the ocean.

There are three staff, an incredible cook, the waiter/butler and a maid.

There is no high speed Internet. Phones in each room. Power is standard North American 110. There are various televisions and stereo systems.

Local amenities include the Lindomar beach resort and restaurant and the El Set restaurant 100 yards away. The taxi to town is $3 to $5. All the typical water sports are available, diving, snorkeling, parasailing, etc. There is a canopy (zip line) tour nearby.