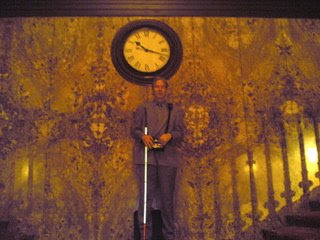 In summary of my May 2006 trip to Spain and the UK, here are some places worth mentioning.

I stayed for the first time at the Hotel Universal in Barcelona and I highly recommend it for its central location, excellent breakfast, descent room and free Internet.

I have stayed many times at the Hotel Prado in Madrid. It is in a great location with Plaza Santa Ana nearby with lots of activity and food. It is not as nice as the Universal but just fine. The wireless Internet is intermittent. I am sure this depends upon your room location. The breakfast is adequate.

The Cumberland Hotel in London has a fantastic location, right on Oxford Street for shopping, next to Hyde Park for strolling and near the Marble Arch underground. It has the largest lobby I have ever seen. Our room was small but elegant. The Internet was expensive but easy to access.

As guests of Dr. Richard Gregory, we had the honor of visiting and having a drink in the most esteemed club of England, the Athenaeum Club. Many major historical meetings and decisions took place at the Athenaeum Club. An entire book showing the Nobel prize winners who were members is on display. To see photos, go to http://www.victorianweb.org/art/architecture/athenaeum/index.html

The oldest restaurant in London is the Veeraswamy Indian restaurant. It was excellent.

Some of the best Lebanese food in London can be had at 85 Picadilly Street, the Fakhreldine, overlooking Green Park.

Another highlight was visiting the movie set of Eragon at Pinewood Studios in Iver Heath outside London. This movie of the very popular book is due out in October. It is being produced by Fox 2000, the same studio that plans to produce a movie about me.

For future mobility reference, the British use the term, "a turning" where we would say, "a cross street."

I flew Easy Jet for the first time, from Madrid to London Gatwick. From Gatwick, I took an express train to Victoria Station in London. Very convenient and inexpensive way to travel.