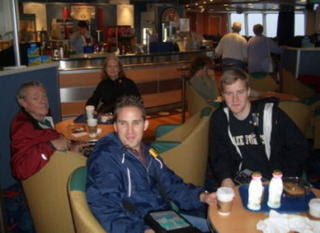 For the “early birds’” group consisting of Carl, Elaine, Chuck, Jamie, and Brian, Sunday became no ordinary picnic in the park. The day began in the foggy early morning because our group boarded a ferry with the destination set for Yarmouth, Nova Scotia, Canada, 110 miles East according to my GPS. We docked around 11 AM.

As a result of three dog guides in our party, the tour company provided us with our own van with the most well-informed and friendly tour guide named Calvin. While we drove along the streets of the Yarmouth area exploring the Nova Scotia maps with our GPS units, Calvin explained that he wore three hats in the community: lobster fisherman, municipal alderman, and of course, tour guide. With this varied background, you can imagine how much information Calvin shared with our group about the sordid history of the area including the struggles between the British and the French Acadians, and the intricacies of lobster fishing. 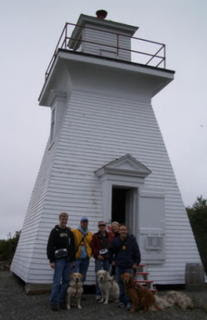 Stops along the tour included St. Anne’s Catholic Church dating back to 1799, a wind farm with 17 massive mills, and an inactive lighthouse at Acadia Village. At lunchtime, we sampled a traditional Acadian dish called roppie pie, which consisted of potatoes and chicken covered with molasses. For dessert we enjoyed both bread pudding and a molasses cookie.

Before returning to the ferry for the 3-hour ride back to Bar Harbor, we had the opportunity to examine an old wooden lobster trap, and as a souvenir, Calvin gave us wooden pegs used in the past to prevent lobsters from opening and closing their claws.

All in all, our trip to New Scotland (Nova Scotia) proved to be an exciting and worthwhile way to spend the day.

The dual-hull catamaran is capable of going 55 miles per hour but I only saw it get as high as 38 on my BrailleNote GPS.

Comments:
Hi Brian,Great to hear you guys enjoyed your trip to Nova Scotia.
Thank you for the kind words,its
special groups like you that make it all worth while.I have done many
tours in the past year and this one
ranks right up there.I wish i could
of got you guys on the long tour(6hours)and spend more time together.If you know of anybody who
is coming are way,we would be glad
to take care of them.

P.S. tell LaPierre that if he is
interested in finding his roots i
can help!!!