My roommate Denna and I dragged ourselves out of bed around eight o'clock this morning. Since we had been out fairly late the night before (using our GPS units to track down some late night ice cream), getting out of bed took some effort.
We met up with the rest of our traveling companions in the lobby of the hotel around eight thirty. Once everyone had arrived and we had gone over some logistical details, we broke up into small groups according to our level of experience and proficiency with the BrilleNote GPS. Because this was my first time using the GPS, I went with a group of three other new users. We spent about two hours learning the basic functions and keystrokes that one needs to know in order to use the GPS. The leader of our group was Carl, who does technical support and new user training for Sendero Group. By the time our class was finished, everyone in the group knew enough about the GPS units to begin using them on our travels around Portland. 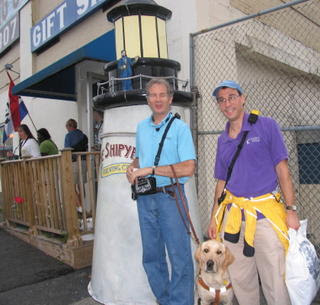 After lunch, several of us decided to go to the Shipyard Brewery. Some of our other traveling companions had had Shipyard beer at the restaurant where they'd eaten lunch and they highly recommended that a group of us go check it out. So, about fifteen of us braved the light rain that had begun to fall and walked the mile or so to the Shipyard Brewery. With visions of hops and barley dancing in our heads, we all trooped into the brewery. Unbeknownst to me at the time, several of the brewery employees pulled two members of our group aside and told them that they didn't want "all these blind people" going upstairs and taking the tour. After all, they said, their are hoses all over the floor and puddles of water everywhere. Luckily, these two people explained that we would all be using canes or dog guides and that these mobility aids would prevent us from getting any sort of trouble. Things seemed settled and we all trooped in to the waiting room. There were about fifty or sixty people waiting to take the tour. A brewery tour guide came up to the front of the room and announced, "Just so everybody knows, we're going to watch an eight minute film on the brewery and the brewing process. After that, we're going to go upstairs and take a tour. This will involve going up three flights of stairs and there are hoses and puddles of water all over the place. So, you might all want to think about that as you watch the film."
Naturally, all of us knew that this was code for, "Are you blind folks sure you can handle this" So, we all nodded and smiled amiably and sat through the eight minute introductory film. After it had ended, the tour guide came back and informed the audience that guide dogs were not allowed upstairs. We tried explaining to the employees that not allowing the guide dogs to come with their owners was against the law. Welaw. They seemed particularly concerned that the dogs would somehow contaminate their yeast. We reminded them that guide dogs are very well groomed and cared for and that, after all, how could they guarantee that any people who went on the tour had good hygene and were clean? After arguing with them for quite some time, most of the group decided not to go on the tour on principle. However, two guide dog users agreed to leave their dogs downstairs with a friend and go on the tour anyway. Being a cane user, I decided to join them. So, Jamie took the tour guide's arm and Denna took my arm and we were off. I was still seething, but I wanted to see what about the brewery floor was so treacherous and frightening. I can honestly say that there was no reason the dogs couldn't have gone. We were never in contact with any of the actual product and, as I said, they don't screen people for cleanliness and all of the guide dogs were probably better groomed then some of the people who take the tour. 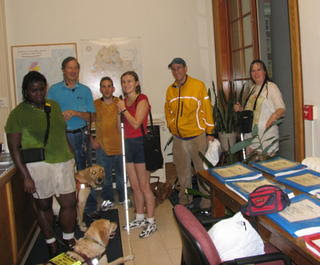 Because we had been treated with such disrespect, none of us bought anything from the gift shop and Mike May called the Seeing Eye to look into the matter. Apparently, another guide dog user had once been denied access into a brewery and the court had found them to be guilty of discrimination. We wished we had known this when we went in, but we warned them that they have not seen the last of us. If anybody feels so moved to Google the Shipyard Brewery in Portland, Maine and let them know that they will not be receiving your business or that of your family and friends, that might be nice.

On the way back to the hotel, it started raining buckets. Although none of us were afraid of melting, we were all carrying BrailleNotes and mPowers and other notetakers, so we tried to find some shelter as fast as we could. We ended up ducking into the tax collector's office at the Portland City Hall and waiting out the rain. The people in the office were very friendly and welcoming and I think they got a big kick out of everyone running in their drenched with our canes and guide dogs. 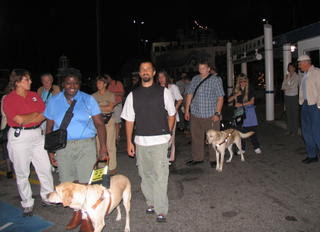 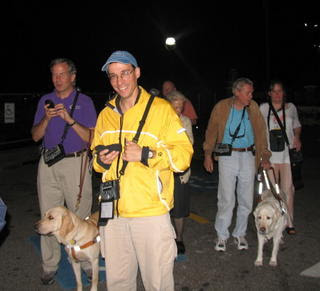 That evening, we all got together as a group for happy hour at the hotel bar and then four of us went out to celebrate Adam's birthday at a restaurant called Three Dollar Dewey's. It's funny, but we were joking on the way about whether or not Sendero Group lists "houses of ill repute" on their list of points of interest. As it turns out, Three Dollar Dewey's used to be a brothel!!! Talk about a strange coincidence! The name of the place comes from the expression, "One dollar, lookee; two dollars, feelee: three dollars, do-ee." However, now Three Dollar Dewey's is just a cozy little pub that serves fish and chips. It was Adam's twenty third birthday, so they brought us all a huge Toll House cookie with ice cream and spoons for all of us. Tomorrow, we're going to demonstrate the GPS to some local blind people, so we have to be up early. It's been a long, full day, so many of us are turning in a little early. We're all really looking forward to going to Bar Harbor tomorrow.
Stacy Cervenka, Minneapolis, MN

Note: Another group successfully accomplished the task of finding a "geo cache." This is a lat/lon with a clue, in this case it was "the Director" who happened to be John Ford, one of Portland's native sons. 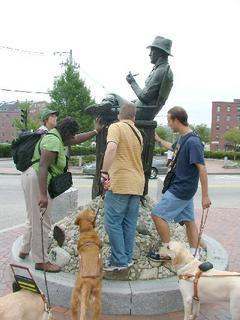 Comments:
As someone who is very highly allergic to dog dander, and also a big fan of Shipyard beer, I can say with great appreciation 'thanks' to Shipyard for not polluting their wonderful brewing with dander.

I think the high standards of health and cleanliness in a brewery should supersede the really trivial inconvenience of not taking a tour with your dogs. Sorry, but that's the way I feel. Good work Shipyard!

Sorry to hear of your 'highly allergic' situation. However, I personally don't believe that the Shipyard brewery maintains the highest standards of health and cleanliness. (In case you are wondering, yes I have toured the area as I live in Portland.) Point being that guide dogs being led through the 'show area' would certainly not have contaminated the brew.

Furthermore, I would like to point out that you more than likely have not had to adjust to the 'really trivial inconvenience' of negotiating an unknown area without the benefit of a guide dog, or if you are more fortunate, your own eyes.

To the group of visitors, I would like to apologize for the inconsiderate behavior of the Shipyard.

I hope that you enjoyed the rest of your journey in Bar Harbor.

I am sorry that this happened in Portland, Maine. You would think that with a service dog training organization in town (My Wonderful Dog), that this type of thing would not happen here. Sounds like the Shipyard employees are in need of some education as to ADA laws.

"Under the Americans with Disabilities Act (ADA), privately owned businesses that serve the public, such as restaurants, hotels, retail stores, taxicabs, theaters, concert halls, and sports facilities, are prohibited from discriminating against individuals with disabilities. The ADA requires these businesses to allow people with disabilities to bring their service animals onto business premises in whatever areas customers are generally allowed."