This morning began in less than ideal circumstances for a group of explorers with expensive electronic equipment, rain. As the side affects from Hurricane Ofelia poured down, our plans seemed ruined. Mike called us together to discuss the situation, and we decided a more in depth workshop would be beneficial. Mike suggested we could take a virtual tour of the city, and improve everyone's skills in this department. We learned how to create a manual route, which allows you to define your own waypoints.

At lunch we talked about taking the island's free shuttle, for a little experience with GPS from a vehicle. When Mike contacted the shuttle company and explained what we wanted to do, they offered to set us up with a bus for a tour of Arcadia National park. This bus tour would prove to surpass our expectations. In many bus tours, one can expect to be told about various attractions, but seldom does this allow one to engage in the environment in which you ventured to see. This tour guide understood the kind of information we sought, for both the sighted participants, and most importantly, the blind GPS users. We all boarded the bus, but we quickly learned that the bus was not going anywhere. It was experiencing transmission difficulties. Never fear, the Island Express manager, Bob, ensured us that we would be underway right away. Our driver, Jeff, was incredible in keeping everyone's spirits high and up beat. We were on a working bus within 30 minutes. As we drove along, it was fascinating to hear an army of keynote synthesizers announcing the streets, and various points of interest along the way including many trail heads. 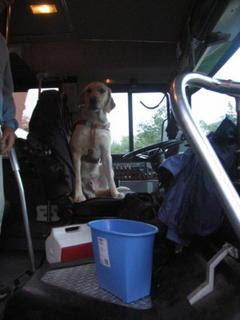 Our first stop was the Precipice Trail. For those who were most adventurous, including our leader Mike May, we climbed a few feet on a rock that sloped at a nearly vertical ascent. A few of us also learned that human beings weren't properly or naturally equipped with suction points that would allow us to climb slippery wet surfaces. Mike slid down the rock several feet, with his Seeing Eye dog Miguel along side. 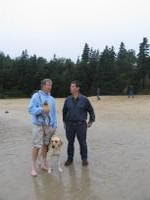 Once we all regained our bearings and land-legs, we drove to sand beach. Of course, the name doesn't indicate any unique features, but for Maine it indicates one of only a few sandy shorelines along the eastern shore board. For the experienced eastern coast travelers, the waters of the coast would be terribly cold and not suited for swimming. But for the rest, they simply removed their socks and shoes, and ran towards the water. Of course, the four legged participants agreed with the idea to go for a little swim. It is safe to say that every one felt a sense of youthful enthusiasm and spirit. It should also be noted that for many of the participants, this location marked the first and hopefully not the last visit to the beach. Among the many stops in our day trip was Thunder Hole. It can be best described as a rock with cavernous holes created by thousands of years of water erosion that causes the water to crash into the cavern and thunder outside of the rock. 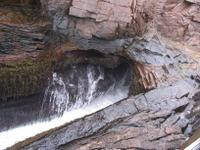 From the sound of crashing waves we moved on to the serenity of Jordan Pond. Some of us purchased items in the gift shop and others discovered the Geo Cache near the pond called, “She dearly loved this spot.” We considered having dinner at their restaurant but decided to head back to down town Bar Harbor where there were more options. Most of us, including nine dogs, ended up at 2 cats for meals ranging from lobster to chicken.

Around 9:30, our GPSing was still not over for the day. We had to get back to the Bar Harbor Regency Hotel where we were staying, 1.4 miles from this part of town. We plugged in that destination and we headed out in small groups, some taking a taxi, most walking along the narrow shoulder of the busy Eden Road. It was an excellent way to walk off a big meal and to let the dogs work. We made it back in record time as the dogs were motivated to get their own dinner. It was pretty incredible team work to explore the island for a day with our dogs or canes for mobility along with the GPS for orientation and sight seeing. The fact that we ended up with a private tour by our newly discovered friend, driver Jeff, was due to local hospitality, good luck and ingenuity. We saw, heard and felt Bar Harbor in ways that few tourists can. There was no way the rain could dampen our spirits or resolve so some of us took a swim at the hotel pool to wrap up the day and to discuss the next. We discussed the next day’s possibilities including a ferry trip East to Yarmouth Nova Scotia for those who didn’t mind rough seas and getting up at 6:30, only 7 hours hence. Dena and I planned to sleep in a bit and to do more exploring of Bar Harbor.