The route to my roots: Coya, Chile

From Los Lingues, near San Fernando, my GPS told me the small mining town of Coya was 47 kilometers northeast as the crow flies. This said nothing of course about the distance or directions to travel by road. Here in lies the real adventure.

My Grandfather had a business selling goods to the mine near Coya. This is where my mother was born and raised until the age of 18. Their house is now owned by the mining company, next door to the house used by the Chilean President for holidays.

We got directions in Spanish from the receptionist at Los Lingues. We had no specific address nor any road names, just general directions and the GPS coordinates for Coya from my city database.

The only help I could offer my wife who was driving was an indication if we were headed in the correct direction or not. I have had a lot of practice using this getting warmer method but it has its short comings. Off we went.

The highway signs and GPS got us to the nearest large city, Rancagua but we gave up on the written directions because there were too many ambiguous signs and round abouts. We were soon relying on my simple point to point GPS heading. When we came to the junction of two small roads where it appeared that we were going up someone’s driveway, we stopped to ask some guys on the road for directions to Coya. They gesticulated and spoke in rapid Spanish from which we gleaned that we should take the dirt road. I distinctly remember hearing that the road to Coya was paved so this made me very skeptical, but again, off we went on the dirt road, 10 kilometers line of sight to the Coya GPS point.

As the road got narrower and muddier, the knot in my stomach got tighter and tighter. My wife hates getting lost and we were definitely in the boonies, nobody to ask directions of and no likely destination in the direction we were traveling.

I began to seriously doubt the accuracy of the Coya GPS point. We were headed down a long dirt road depending upon the unproven GPS point and the questionable word of some guys alongside the road.

After half an hour of driving, we hadn’t seen a single car. There were occasional boarded up houses and a few signs but none for Coya. The pressure grew, especially when we reached 1 kilometer from Coya, the GPS said it was off to the right and then it started getting further and further away and still no sign of civilization.

Suddenly, we came over a rise and intersected a paved road, probably the highway which had been paralleling our dirt road. Talk about a sigh of relief but the journey wasn’t over yet.

The sign toward Coya said left and off we went in that direction. In another few kilometers, we came across a pretty run down town. There were two narrow lanes through the town of Coya just wide enough for one car and 3 horses. At a single lane bridge, cars would take turns crossing.

Now that we had found Coya, and believe me I marked it for future reference and every junction on the way, now we were searching for the “country club”, a very unlikely establishment in the mountain mining pueblo. 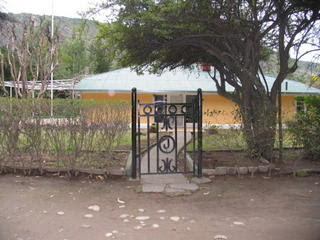 Eventually, we found it a few K out of town and from there we got directions to what is called Casa 100, the presidential retreat. Turns out we had wandered near it earlier but the gate was closed and there were many warning signs about trespassing.

This time, the gate happened to be open and with much trepidation, we boldly drove in. Several cars were parked and we drove passed them to my grandfather’s house designated by the Circle J for James on the iron gate. We took some pictures and were debating if we should walk around when a man came up to the car. We explained our story in Spanish and he said very nicely in English that we were welcome to look around. He introduced himself as the Vice-President of Chile. He returned with a key to the house so we could look around inside as well. It seemed amazing that he wouldn’t have body guards. He even invited us into the main house where he and his family were spending this Monday saint’s day in Chile. We declined not wanting to interrupt any further. I don’t suppose they would want me publishing the GPS coordinates of that house but I have them for future reference. 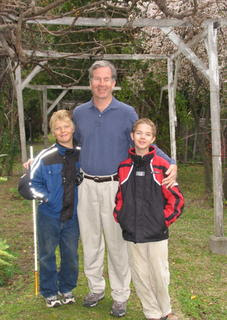 We of course still had to find our way back to Santiago, not a simple feat, but the main adventure had been accomplished. The moral of the story, navigating with a GPS point is better than nothing but be prepared for a pressure-ridden experience. Had I to do it all over again, I’d hire a chauffeur.

Comments:
Hi, I was born in Coya in 1963, and I've been looking for Coya GPS coordinates to position it in Google Earth and have them as a POI in my Garmin unit.

I already found coordinates for CCC (Coya Country Club), where I used to play golf with my dad until he retired from Codelco El Teniente (ex Braden Copper Company).

I know almost every family that lived in Coya from 1963 to 1974, when we move down to Rancagua.

Also tell me your grandfather's name, chances are that he knew my father.

My name is Julie Trincado, an American married to a Chilean who was born in Sewell in 1944. My husband's grandfather, Porferio, carried mining building materials to El Teniente when it was being built and lived in Coya for many years. I believe my husband's aunt still lives there. We are coming to Chile in October 2006 and I look forward to seeing Coya, Rancaua, and Sewell - as well as many other places I've only heard about for the last 36 years.

Best to you all!

My family lived in Coya (the construction Camp) 1969-1970. My dad, Bob Bills, was a General Sup't on the tunnel at El Teniente. What a great place to be a kid. We rode horses all over the mountainside and had lots of fun at the Country Club. Made many new friends (Chileno) but have lost track of all of them. Would love to go back some day to that area!
Patty BillS Snyder