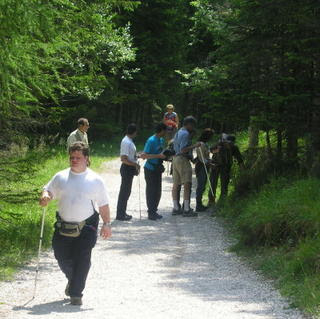 Many email and verbal discussions went into determining the appropriate level of a GPS hike for the blind Italians despite the fact that this conference is called No Barriers. We kept hearing how these were city folk and they were only used to walking down hill. It was my recommendation that we have three levels of hikes, easy, medium and hard. However, once we got to Cortina, vociferous opinions on this subject abounded and I decided to sort this out once we were all together.
There are concepts about independent travel that are difficult to communicate in one’s native English, let alone in another language. It has been my experience on average that blind Europeans are less assertive, some might say more polite, when it comes to insisting on independent travel. The American sighted public certainly except “no thanks” when they offer to help whereas most Europeans insist on helping. It can come down to a mild confrontation between who insists more, the blind person wanting to do it himself or the sighted person misguidedly wanting to be helpful.

Our small group was comprised of 3 blind Italians from Milan, Marco, Luiegi, and Mauro, their sighted guides, several other sighted folks including my wife Jennifer and Cristina, a low vision woman from Florida, Sila, plus a very colorful park ranger, Jordano. He was quite the Italian mountain man dressed in camouflage and sporting a 2 meter walking stick. Jordano knew every nook and cranny of the area, every plant and animal. The next couple hours together would prove to be a question of who learned more, the blind folks or the sighted ones.

I gave a pep talk explaining how I would use my BrailleNote GPS to guide the way, Jordano would tell us about the forest and the sighted folks would let the blind people navigate on their own. Given the great trepidation ahead of time, I knew this might be the most difficult challenge of the relatively easy hike to the water falls.

In addition to the GPS, we had a few other tools for navigating. I brought an FM communication system, whereby Cristina had a microphone that transmitted her translation from Jordano’s Italian into English for those of us wearing the receivers. We could get 100 feet or more away from her. Marco had a pair of walkie talkies and he gave one to Cristina. The cane techniques being used were rather unorthodox but then again, this whole multi lingual, multi cultural adventure was unorthodox. Just picture the traditional sighted Italian mountain man and blind American with GPS and speech synthesizer walking side by side. 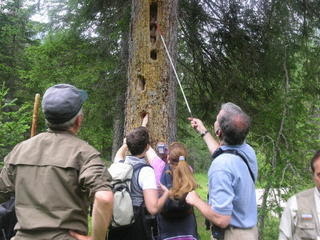 Jordano and I took turns speaking, he with details about the forest, the Black Wood Pecker who drilled fist sized holes in the trees, pointing out the trenches dug by the Italian soldiers, and me, announcing a turn to the left across a bridge over the River Boite and the distance to the water falls, me in my calm way and Jordano in his animated Italian gesturing way, both of us passionate about our subjects.

Jordano and some of the Italian guides began expressing concern as our group spread out along the trail and at one point; a group broke off to take a separate path closer to the river. One woman got very annoyed with Cristina, admonishing her, that we needed to stay together so we didn’t get run over by the many mountain bikes. Cristina explained that the blind people would be fine avoiding the cyclists. Jordano would get very worked up when one of us would stand too close to a ledge. Little did he know that Cristina had a climbing harness in her backpack in case we wanted to hike under the water falls.
Cristina said, “Mike, your advice to the blind people to explore on their own is working too well. I can’t even see Marco and Luiegi.” I lengthened my stride and caught up with them, far ahead of the group, huffing and puffing but not slowing a bit. We walked together in companionable silence, the language barrier occasionally broken by a mutual appreciation of the beautiful surroundings. At one point, Marco said, “Michael”, and when he caught up to me, he put my hand on his very ample stomach, communicating that we needed to slow down just a bit. I could occasionally hear comments from Cristina through my receiver, everyone had settled into their conversations and common pace partners, and was a bit less worried about navigating and more interested in getting to know each other and sharing the experience in this beautiful forest.

I marked the key intersections and vistas in my BrailleNote PK for future reference. I definitely planned to come back to this place, maybe with some Sendero Way Fun adventurers in 2006. FYI, the Italian word for path is Sentiero as opposed to Sendero in Spanish. 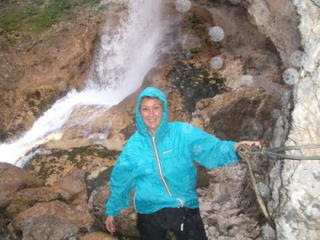 After 2.5 kilometers, we reached the water falls where 4 paths converged along with many hikers and bikers. Everyone stopped to look over the railing at the thundering falls. Some brave souls traversed the narrow ledge that passed under the falls to the other side of the river. One of our sighted companions, Tony, agreed that he would give it a try and Cristina helped him put a harness on. He didn’t let on that he was a world class climber, maybe so a cute Italian woman could help dress him. A cable was anchored to the rocks for the harness to clip into in case one slipped on the wet rocks under the falls.

I wasn’t planning to leave the group to cross the falls but I decided to walk along the cable a ways to see what it was like. Ranger Jordano was more than a little hesitant about this. When I ignored his obvious Italian words to stop, he implored Cristina to stop me. Jennifer reassured me that it was a safe ledge and I worked my way passed a few people coming from the other side. I was mostly worried about getting my BrailleNote wet. Some of the Italian tourists nearby got into the act saying, “A blind person shouldn’t do this. It isn’t safe. What would he get out of it anyway?” Cristina shut them up by saying, “I’ll have you know that one of the blind people from this group has climbed Everest”, referring to Eric Weihenmayer who was at another location in Cortina giving blind people a rock climbing clinic.

I decided to turn back after 50 feet or so rather than creating an international incident and possibly giving Ranger Jordano a heart attack. Had there not been so many members of the public getting involved, and just a few of us, I might have pressed on. After all, Rome wasn’t built in a day and educating Jordano and others would have to proceed in small steps. There was more gained by turning back after a glimpse of what was possible than if I had continued in blatant disregard for the group. As it turned out, this water falls incident was told and retold over the next couple days and I didn’t even have to get wet. The falls are marked in the GPS for future reference for a more private adventure.

No sooner had Jordano nearly kissed me for coming back to safe ground than he saw Marco clambering up a steep side path, nearly coming unglued all over again. Tony told me later that the smile of accomplishment on Marco’s face was priceless. Big stomach and all, Marco was the first person back to our finishing point. As we would learn the next day, we had created a monster.

The Italians went back to town for a big meal and some of us walked a short distance to the Capo Verde bar and restaurant, right there on the river for a beer, sandwich and debriefing about the Saturday hike to the falls.