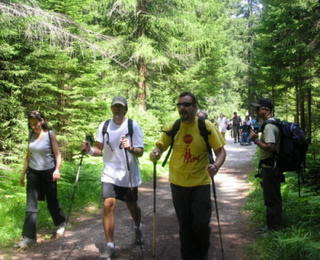 The Sunday hike was the opportunity for all the No Barriers participants, speakers and organizers to hike and talk together around the Fiames National Park loop, which I had previously marked with GPS points. We attempted a semblance of order but this soon disintegrated into a Malay of sighted, wheelchairs, and blind people walking and rolling counter clockwise. Woe to anyone trying to pass against our flow.

I had a chance to compare notes with Eric Weihenmayer, Sam from Florida and Andy from Greenwich about various blindness issues and to show them how the BrailleNote GPS worked in this off-road situation. Eric was pretty intrigued with the idea of using it to kayak on his own, just a matter of keeping the PK dry. One of the sighted guides for the Milan group was Maria Franca, who has a 3 year-old blind daughter. She told me of the lack of support services both for parents and blind children in her community. Her daughter will do just fine with such a great mom.

Seven kilometers later, we all met at a big tent on the landing strip for lunch and goodbyes. We really enjoyed being part of No Barriers and meeting a lot of wonderful people, especially Cristina who shared her heart, time and friends with us. For us, Cortina and Cristina are synonymous.

In comparison, Venice does not deserve its own Blog entry. The most interesting thing for me was testing the GPS in streets only 6 feet wide and people watching in San Marcos Plaza and among the streets.

The close quarters and density of people and shops was too much of a shock coming straight from a mountain town. While Jennifer would go into a shop, I’d stand outside and compare GPS receivers while people watching. This was a low vision person’s Mecca because there were so many people and they streamed by within inches or feet at most. 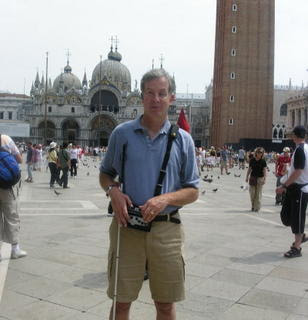 I was surprised that I could get GPS signals among these streets, smaller than most sidewalks and I was surprised by the variety of people. Here is my stream of visual images as the hordes streamed by:
Dogs, umbrellas, Capri pants, long skirts, halter tops, hats, bald heads, long hair, pinned up hair, pink jingly shoes, walking canes, rolling suitcases, box carts, flags carried by tour guides and close packed people following them, all shapes and sizes of people, one particularly tall svelte woman, lots of iridescent green tops and shorts, even one person head to foot in bright green, eating ice-cream, shopping bags, mobile phones pressed to the head, pigeons and more pigeons. The people and shops per square meter in Venice must rival places in Asia. What I do love here are the boats passing below our window with people playing instruments and singing on board. I understand the most efficient way to get to the airport in the morning for our return flight to California will be a water taxi. Pretty darn full 5 days in Italy. I’ll be back. Got to revisit Milan and Rome and check out Sicily for the first time.