There is no better way to fully experience a city than to walk, eat, walk, drink and walk some more, especially a city like Paris. My friend Fiona of 23 years took the TGV train from Switzerland to Paris and I flew in from California via Israel and Sweden to meet her. After all that flying, I was definitely ready to explore.

With the sun shining, we hit the pavement at 8:30 AM, no specific destination in mind. Fiona could see the Eiffel Tower so we headed in that direction. I felt a plastic model before, which did not do it justice, especially when standing underneath embraced by the four tower legs hundreds of feet apart. With Fiona's explanation, I was able to visually understand the structure so there was no need to stand around to go inside. The cue was already long at 9 AM.

Over coffee and croissant, Fiona pored over the guidebook and map while I used my BrailleNote GPS to see what I could find. After two coffees, we buzzed out the door with a couple ideas of areas to visit. I often find that a city bus tour is a good way to get an overview but we elected to take a hop-on-hop-off boat tour instead.
We proceeded up the Seine at 10 kHz. Fiona pointed out the sites and I told her the names of the many bridges we passed using my BrailleNote GPS. There is so much history, on both sides and around every bend. Notre Dame for example on the island in the Seine. It too had long lines but was fun to see from the outside. Next to it was a working hospital with its own plaques, memorials, courtyard with box hedge and much quieter portrayal of history and no lines.

We continued to hop on and off the boat, seeing things like the memorial to the Jews deported by the Vichy government, the zoological park and the museum of natural history. It had a fun line up of two-by-two life-size stuffed animals headed for Noah's Arc. The strangest animal in the zoo we saw was a raccoon-like creature called a Binturong. I couldn't see its details but I could see its vague shape as it clambered on its rock mound. It was interesting and unsettling at the same time to see these animals in captivity.

The Modern Art Museum caused quite a stir when its design was first proposed because of its radical look. Much of the structure, supports and pipes are exposed and painted colorfully. Multiple escalators lead to the top for a 360-degree view of Paris and its mostly white rooftops.

One of my favorite sites of the day was a pool below this museum with many useless but playful fountain creations. We ate lunch while we watched the bright yellow and red woman spinning around on her back with water jetting from one breast along with a dozen other wild moving spurting fountains. 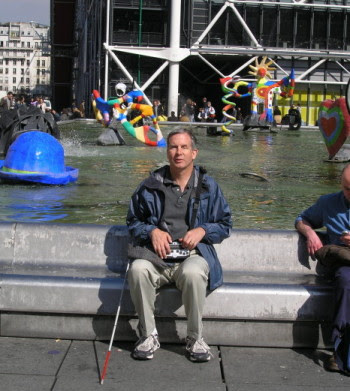 I really loved just walking the narrow lanes and grand avenues being a sponge for a vibrant Paris on a beautiful day. Fiona told me everyone was smiling. I certainly was. She described the people and places, the nooks and crannies, the bronze man emerging from a stone wall, the pest control store window full of dead rats, a street where a nail bomb was exploded, the Kindergarten from which children were deported from 1942 to 1944, the specialty shops for cats, for writing tools, for sex toys, Goldberg's Jewish Deli, the sidewalk book sellers, the Porsche Gt convertible in front of the Ritz, not to mention the ubiquitous short metal posts to keep the cars from parking on the sidewalk. I discovered when tapping these poles with my cane that some resonated at a lower tone than their neighbors, kind of representative of the melting pot of the people on the street. 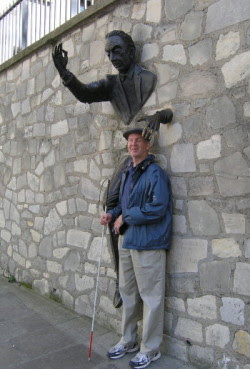 After 10 kilometers walking around Paris, we were more than ready for a glass of wine and dinner at Fiona's friends, Eva and Dick. Finally, after fifteen hours since we set out, we returned to Hotel Muguet and the opportunity to take off our shoes.

If we thought we covered a lot of ground on day one, we covered even more ground on day two. Fiona was adept at navigating the underground and I had fun helping to guide us with the GPS above ground. Sometimes we followed a route, other times we would be deep in conversation and just followed our feet, which led us first on day two, to Mont Martre. This is one of the highest vantage points in Paris. It had a more distant aerial perspective of Paris than the Modern Art Museum from the previous day. It was a great place to have lunch. 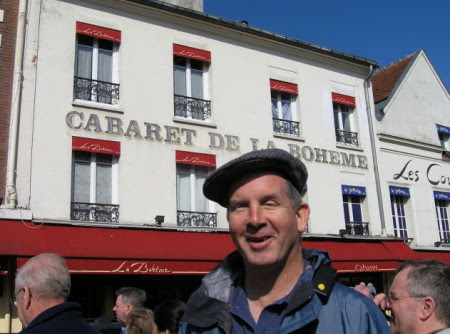 From there we walked and talked and occasionally stopped for a coffee. We traversed several Paris districts including the world's most exclusive shopping district. The crowds thinned out around those stores and became dense again around the more affordable shops. The Jewish district had a wonderful array of small shops, which specialized in everything you can think of. I even found my favorite liquor, Genepi, which is derived from alpine herbs.

Saturday night, I tried Lebanese wine for the first time along with a very tasty meal, not an American accent within earshot, great ambiance.

On the way home, our underground transport went a bit awry when we couldn't find a working ticket machine so we hopped the gate. There are cameras everywhere in the underground but we were not arrested.

We arrived back at our hotel, nearly 10 miles and 14 hours since we set out Saturday morning. Fiona has a beautiful, natural way of articulating what she sees that I can visualize what she sees for myself. In 17 miles of walking and 29 hours of talking, we had really experienced Paris and dissected the world’s problems in the process. Not a bad way to spend a weekend.

I was honored to be the keynote speaker for the 2005 conference of the International Association of Education and Rehabilitation for the blind, newly named “Hushim (the senses). My keynote was entitled “Travel Tales” where I spoke of my worldwide travel and the attitudes, tools and techniques it takes to travel independently. I had additional sessions on GPS wayfinding, new vision restoration and an open session to talk about anything and everything. This conference was held in a hotel atop a hill between Jerusalem and Bethlehem run by a kibbutz, Ramat Rachel. 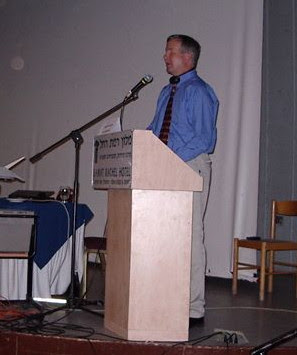 During and between sessions, the participants soaked up the information I had to offer and I learned a lot about issues unique to Israel. For example, accessible technology is somewhat limited by the lack of options in the Hebrew language, which is written from right to left in print but is left to right in Braille. There is only one Hebrew speech synthesizer and the screen readers were mediocre at best. It is such a small market; prospects for future development are bleak.

I was interested to hear that blind people volunteer for the army and a few are military professionals in fields like computers and translation. All sighted Israelis must serve. Services to blind people in some of the villages in turmoil have been cut off. It is challenging for instructors who have the daunting task of working with blind Arabs and Israelis around the country. In fact, some of the students have become blind from guns or bombs.

I didn’t have any sense of danger or ubiquitous security. Our hotel had a high fence around the grounds and a guard checking people at a gate. I didn’t have the chance to go in many stores but I am told that one is routinely searched at the door. However, it is a way of life and the locals seem to take it in stride.

Although there are numerous organizations for the blind, none seem to be consumer groups like ACB or NFB in the U.S. Budget cuts have reduced services although blind people enjoy a number of subsidies. 80 percent of equipment can be funded in pursuit of a job. 90% of the cost of up to two canes per year is funded. The Voice Diary is subsidized. Even some household appliances are subsidized for blind people. There are two guide dog schools in Israel, one in Tel Aviv and one in the North. I had the opportunity to visit the school in Tel Aviv and to speak to the staff. It is small relative to US schools but beautiful and nicely laid out.

I met quite a few transplanted Americans, as was my host, Shmuel Alan Siegal. He was my first mobility instructor at age 13 in California and he was instrumental in bringing me to Israel for this conference. There were plenty of English speakers but it wasn’t as widely spoken, as I would have thought. There was a simultaneous translator to and from Hebrew for the presentations. My Hebrew vocabularly has now increased from 0 to a half dozen words. I was fascinated by the language and hope to return soon to explore more of the sites and sounds of this beautiful region of the world.