Ambassador Josh is on the road again: Que Lindo Goes to Mexico

What a pleasant surprise to arrive in a Spanish speaking country, expecting the usual resistance to bringing my Seeing Eye Dog into public places, and nothing happened. Nothing like Chile or Brazil. Nobody said anything other than the ubiquitous, Que Lindo. It was particularly nice to be working Josh again after "caning it" in the United Kingdom the week before.

It turns out that Mexico passed a law a few years ago specifically requiring the admittance of dog guides in public places. This law was passed in conjunction with establishing disabled parking regulations.

Nonetheless, Josh had some interesting challenges in Mexico City. In a city of nearly 20 million people and 7 million cars there is terrible traffic, nonfunctioning signal lights, cars on the sidewalks, broken sidewalks and inconsistent terrain. There were not as many loose dogs as I expected. And yet, every time I entered a store or restaurant, there was seldom any question about being allowed to bring Josh inside. This is in stark contrast with my last visit to Mexico City 17 years ago when I had to sneak my first dog Totie onto a bus and keep her hidden for the 8 hour trip to Huajaca. 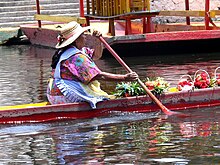 Our hosts in Mexico took us on a fascinating afternoon boat (Chalupa) trip among the ancient canals of Xochomilco. This was a flat boat with a picnic table in the middle. It was propelled by a guy standing at the back pushing us along with a 15 foot pole. Other Chalupas had floating musicians, floating restaurants, vendors and even picture takers. The unique story of how these canals were formed and the quiet movement of the Chalupa was the best part of this excursion. I did try my hand at poling the boat which gave me great respect for the Mexican poller who propelled us for 3 hours. Not much for Josh to do but lay under the table, although the occasional Great Heron got his attention.

Josh did get a work out guiding me up the 800 or so steps to the top of the Pyramid of the Sun in the ancient city of Titiojakan. This was not quite as treacherous as some hiking we have done in the Sierra Nevada Mountains but it was tricky. The thing that is amazing about these unusual kinds of guiding experiences is that the dog must employ modified guiding techniques which are demanded by unusual circumstances like very narrow stairs requiring an almost single file approach.

Descending some of the steepest sections was particularly precarious. Josh was of course going down head first and while he was guiding me, I was supporting him with the harness from a nose-dive.
We tramped around through broken rubble and ruins and through the museum. There is one room which has an entirely glass floor which is a couple feet over a small model replica of the ancient city. This is where Josh drew the line. He was not going to take responsibility for me stepping out into what looked like thin air. He was willing to heel, somewhat reluctantly, but he would not guide me in this room.

Although touching the original stone carvings in this museum is strictly forbidden, one guard personally showed me a whole wall of carvings. At the Archeological Museum back in Mexico City, blind people are allowed to touch some of the pieces if prior arrangements are made. It is mind boggling to imagine the incredible amount of work and artistry which went into the stone carvings. It is ah inspiring to be touching something which was touched by other human hands 2000 years ago.
I was told that there about 100 dog guides around Mexico City and I saw a dozen or so during my visits and presentations. Apparently, the Purina Foundation pays for a half dozen blind Mexicans to go to Leader Dog along with an interpreter for the group. I met one woman with a dog from the Guide Dog Foundation; she spoke English very well. I also met a couple dogs and their owners from the new Mexican dog guide school. They seemed fine the little I saw of them but other people told me that the dogs and training are a bit weak yet. They were proud to announce that they are the first dog guide school in Latin America. I was most impressed by the fact that they had passed a dog guide law and that public awareness was good enough that one could travel freely in Mexico City. It did help being able to speak Spanish as not everyone understood right away that Josh was a "Perro Gia" and not just a pet on a stroll.

The highlight of my trip other than the new friends I made in two of our Mexican hosts, was a visit to the Comite Por Ciegos, a rehabilitation center which serves about 350 blind people each year. They only scratch the surface of the 2 million blind people in Mexico but they are nonetheless making a difference in a country where there is no public funding for the blind. I had a heart-to-heart talk with a class of 25 blind young adults about the barriers we all face in social and career development. We discussed issues like, aren't blind people in the United States all rich and taken care of. It seemed to bring us together when I explained that my own upbringing included a broken home with 5 children and a mother who was working and going to school at the same time. I felt that I did inspire them and the next day I was able to go a step further by appearing on Hoy Mismo (Today), a national TV show seen by 30 Million Mexicans and throughout the Spanish speaking world. Josh did his part by laying at my feet quietly and looking beautiful, Que Lindo.

As I fly back to California, an exemplary Seeing Eye dog at my feet, writing on my talking laptop, dressed in an expensive suit, with a good job and family awaiting me, that I am more than just a little fortunate and that I can't return too soon to share my good fortune with the blind people of Mexico. I am reminded too that there was a day when dog guide access was not so easy in this country. Thanks to Embassador Buddy and the first Seeing Eye dogs and their masters.